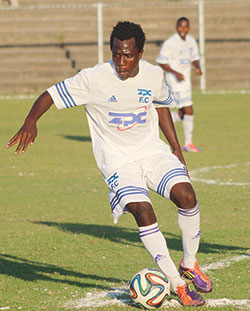 ZPC Kariba 1-0 Chicken Inn
FIFTEEN games unbeaten! Well, statistics don’t lie.
Artwell Nyamiwa scored the solitary goal in the 72nd minute with a diving header to ensure that the Castle Lager Premier Soccer League newcomers remained in the hunt for the league title in their maiden season.
ZPC Kariba, even without their head coach Saul Chaminuka, can still electrocute teams and on Friday Chicken Inn were the latest victims of their excellent run which has seen them move back into second position with 27 points.
They are on par with leaders Highlanders, who play Bantu Rovers at Barbourfields Stadium on Sunday, but have an inferior goal difference.
Assistant coach Tembo Chuma took charge of his second game after beating Hwange 2-0 last week as Chaminuka is completing a CAF A Licence course and seems to have found the winning formula after nine draws.
Chicken Inn suffered their second defeat in a row after they were beaten 2-1 last Saturday at home by Caps United, who were under assistant coach Mike Madzivanyika.
Friday’s setback means things are not looking good for coach Joey Antipas, who will certainly be asked some tough questions by his bosses next week.
The Bulawayo side has all the resources and have been built by the late Adam Ndlovu two seasons ago, they were expected to challenge for the league title, but with the kind of performances they are giving, that could just be a pipe dream.
Antipas has chopped and changed the side, bringing in his former Motor Action players, including assistant Prince Matore, which has seemingly killed the culture of the Bulawayo club, who won the Net One Charity Shield last season.
Fixtures
Saturday:  Harare City vs Hwange (Rufaro), FC Platinum vs Shabanie Mine (Mandava)
Sunday: Caps United vs Dynamos (NSS), Black Rhinos vs How Mine (Rimuka), Buffaloes vs Chiredzi (Chiredzi), Triangle vs Chapungu (Chapungu), Highlanders vs Bantu Rovers (BF)