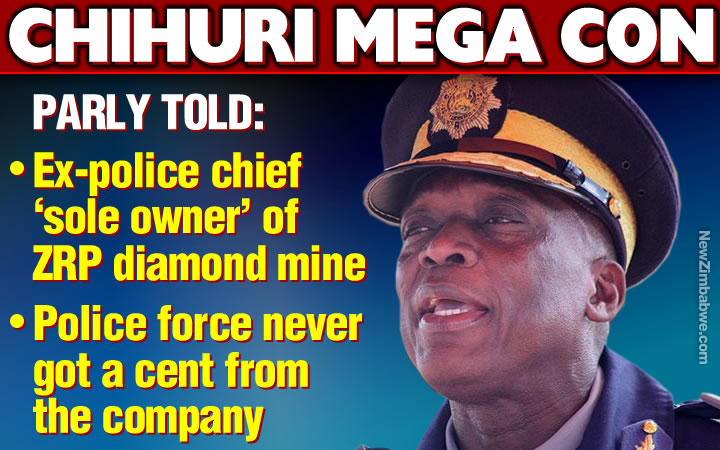 SHOCK revelations have emerged regarding the ownership and operations of a company operating at the controversial Marange diamond fields which was supposedly part-owned by the Zimbabwe Republic Police (ZRP).

Legislators on the parliamentary portfolio committee on mines and energy heard Monday that the ZRP had no records backing its supposed part-ownership of Gye Nyame diamond mining company.

The company was granted mining concessions in the Marange area in 2011 before it was later placed under provisional liquidation and then under judicial management.

It was supposedly a joint venture between the state-owned Zimbabwe Mining Development Company (ZMDC), a firm called Bill Minerals, and the ZRP Trust.

However, senior police officers told legislators that only Chihuri knew what was going on at the company with no revenue ever accruing to the police force.

Directives regarding the operation of the company were also given “verbally by Chihuri” who effectively became the “sole owner” of the firm.

Retired police commissioner Oliver Chibage, who worked as Chihuri’s personal assistant, told MPs that he was not even aware that the company existed until he got a call from a shareholder complaining about harassment by some police officers.

Led by independent legislator Temba Mliswa, the parliamentary committee is hearing oral evidence on the Marange operations following claims by former president Robert Mugabe that the country was swindled of about $15 billion in diamond revenues.

Appearing before the committee, acting commissioner general Innocent Matibili said despite reports about ZRP Trust diamond mining company, nobody in the force, apart from Chihuri, knew about its operations, management and board members.

“Nobody in the police force knew about its paper work, operations and staff compliments expect Chihuri,” said Matibili.

“He (Chihuri) literally handpicked his own men and women to run the operations of the diamond company.

“And even the revenue generated by the company never reached police coffers.”

Former senior police officers who were also verbally appointed to the company board by Chihuri also gave evidence before the committee.

All three said, despite being appointed to the Gye Nyame board, they did not know anything about how the company operated.

Company secretary Kenneth Mawodzwa, also handpicked by Chihuri from the police legal department, said he tried but failed to organise the operations of the company.

“Mr chairman there was a plethora of problems, things were not straight, no environmental assessment certificate, the company had no bank account,” Mawodzwa explained.

“All statutory requirements were not in place, I made recommendations to try and put a structure in place, to no avail, the company did not have even a bank account.”

He added, “But what I can tell you for sure is there were some diamonds that had been mined before, how they were sold, I don’t know but Chihuri knows.”

Chihuri was expected to appear before the committee Monday but failed to turn. It was the second time he has snubbed the hearings.