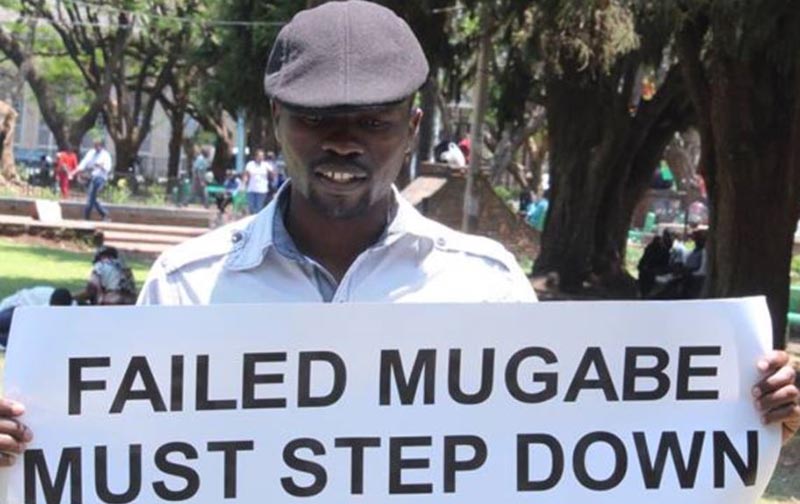 NewZimbabwe.com witnessed tired weekend shoppers who had entered the lush green park to relax, dashing off the gardens after being confronted by heavily armed anti-riot police officers who rudely told them to disperse.

“When it comes to gathering they would have informed Harare province. You may want to check with the provincial spokesperson,” said Nyathi.

Efforts to get comment from police in Harare were fruitless.

Saturday 9th March marks 4 years since, Dzamara was abducted in Harare’s Glen View high density suburb and since then his whereabouts are unknown.

Dzamara had for month been agitating in a one man campaign demanding that then President Robert Mugabe should step down. The activist had used the park as the venue for his picketing and was towards the end joined by a few others forming a shadowy group that became known as Occupy Africa Unity Square campaign.

Two years ago, Mnangagwa then vice president and who oversaw the Justice Ministry while attending the Universal Periodic Review meeting of the United Nations Human Rights Council in Switzerland appealed to members of the public to help him find the abducted activist and putting up a $10 000 bounty as reward for information on the man’s whereabouts.

Dzamara’s brother Patson confirmed the family had planned a commemoration and slammed the State’s heavy-handed response.

“This clearly shows this is the very same system that abducted Itai,” said Patson.

“Once again they betray their hypocrisy and insincerity. When their partisans protest against sanctions, they are allowed to go ahead.”

He added: “When we want to remember our hero, or in any way protest the oppression they visit on us, they respond with Rhodesian-era brutality.

“This is obviously despicable, unacceptable and a clear attestation of the fact that there is nothing new about the so called facade they erroneously call new dispensation.”

He added that Dzamara’s family would work to “finish what he started.”

“Inspired by Itai’s bold stand against oppression, we will not cower. We commit to finish what he started and getting this evil government to account for Itai,” said Patson.

Unsuspecting shoppers who entered the park using an unmanned entrance had to endure minutes of interrogation by police.

Harare City Council sweepers had to abandon their brooms as the nonsense anti-riot officers could not have none of it.

Also parked close to the Parliament Building was two ZRP trucks with dozens of officers for back up.

Dzamara’s wife Sheffra is on record saying that President Emmerson Mnangagwa is no different from Mugabe. Former Information Minister Jonathan Moyo at the time claimed Dzamara could have slipped out of the country through “our porous borders.”