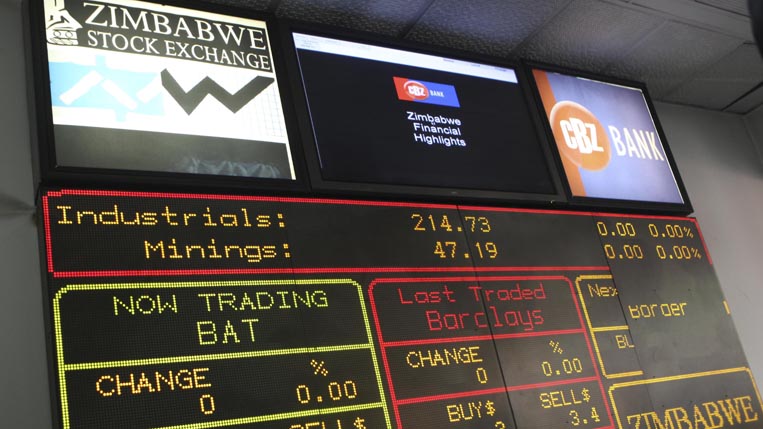 HARARE: The stock market grew fastest in October this year, as investors scurried for safe haven equities in the face of uncertainty around government’s plans to introduce a local currency in the form of ‘bond notes.’
President Robert Mugabe on Monday gazetted regulations to designate the bond notes as legal tender.Government hopes the notes will ease a biting US dollar bank note shortage but the plans appear to have spooked investors.
Market capitalisation increased by 22.13 percent, from $2,725 billion in the previous month to $3,328 billion, the highest since last November.
Turnover increased by 77.79 percent to reach an all-year high of $23,2 million, the highest since June 2015.
The main industrial index gained 22.09 percent to close at 120.82 points while the mining index also advanced 26.87 percent to 33.76 points, its highest point this year.
Total volumes traded increased by 156.89 percent to 177.38 million shares.
Investors coalesced around the big cap counters, Delta and Econet which advanced 21.37 percent and 53.06 percent to close the month at 72.82 cents and 30 cents.
National Foods, Seedco and Padenga also added 41.34 percent, 37.24 percent and 31.58 percent to trade at 300 cents, 82 cents and 15 cents in that order. BAT and Simbisa Brands picked up 22.95 percent and 17.5 percent respectively.
Among the top movers were Axia, Zim Papers and OK Zimbabwe adding 66.67 percent, 60 percent and 42.35 percent respectively. Colcom and Willdale also gained 40.54 percent and 33.33 percent respectively.
The insurance giant, Old Mutual which is trading at a premium, advanced 11.15 percent to close at 322.33 cents.
Counters to buck the trend included Truworths, Ariston, and Dairibord which lost 37.50 percent, 22.22 percent and 16.67 percent while Pearl and Nicoz Diamond eased 9.09 percent and 6.25 percent respectively.
The 26.87 percent surge in the resource index was largely on the back of Bindura, which picked up 66.67 percent to close at 2 cents. Riozim also gained 6.12 percent in the month.
Foreigners remain skeptical about the government’s ‘surrogate currency’ move, selling shares worth $18,902 million in October, an all-year high for a month and the highest since March 2015. They bought shares worth $2 million.Advertisement