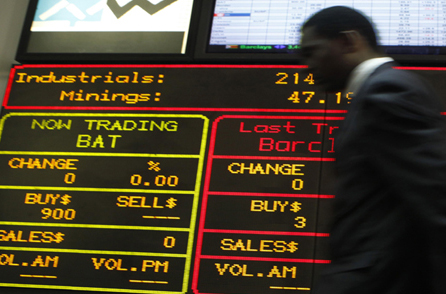 HARARE: The Zimbabwe Stock Exchange industrial index on Wednesday bounced back from losses recorded over the past two days, picking up 2.34 percent to close at 120.69 points.
The bourse, which has been bullish throughout October, was dragged down on Monday and Tuesday after The Coca Cola Company (TCCC) made public plans to terminate its bottlers agreement with Delta Corporation, which is the largest counter on the exchange by market capitalisation.
Delta traded stable on Wednesday, remaining at 75 cents.
National Foods and OK Zimbabwe gained 36.21 percent and 20.10 percent to settle at 300 cents and 4.84 cents, respectively. BAT, Pearl and Axia also advanced 1.4 percent, 13.21 percent and 6.73 percent to close at 1475 cents, 1.80 cents and 5.55 cents in that order.
Barclays and FBC picked up 2.5 percent and 0.7 percent to close at 2.05 cents and 7.5 cents respectively. Simbisa also added 0.6 percent to trade at 14.10 cents.
Powerspeed was the only loser today after losing a marginal 0.45 percent to close at 2.19 cents.
There were no trades on the mining index on Wednesday, leaving it unchanged at 33.17 points.Advertisement