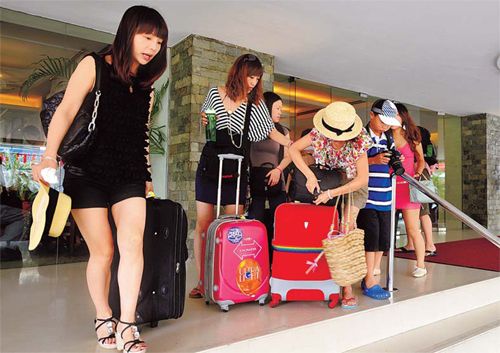 THE Zimbabwe Tourism Authority (ZTA) is targeting to bring at least 100,000 Chinese tourists into the country in the next three years, a tourism official has said.
Karikoga Kaseke, the ZTA chief executive told The Source that there has been a drastic decline of Chinese tourist arrivals into Zimbabwe over the past few years.
“Zimbabwe has not been doing well in the Chinese market yet we have excellent relations with China which we need to harness. We need to translate our political goodwill into economic benefit,” he said.
This comes as Chinese tourist arrivals to Zimbabwe plunged in the first half of this year to 2,730 from 10,173 recorded during the same period last year, according to figures released recently by the ZTA.
Overall, visitors from Asia during the period declined by 61 percent to 16,370 from 26,420 recorded during the same period last year.
The ZTA attributed the sharp decline in arrivals from Asia to decreased arrivals from China, Japan, and South Korea which are the region’s leading markets.
Industry experts, however, assert that rigorous visa-applying procedure, poor air connectivity are the main obstacles barring more Chinese to visit Zimbabwe.
Kaseke noted that Zimbabwe was among the first eight countries in Africa in to receive the Approved Destination Status in 2004 which meant that the Chinese were now allowed to visit Zimbabwe but because of visa and access issues this status has not been fully exploited.
“We should therefore leverage on all these relations to grow our tourism sector thereby contributing to the economy. Our projections point to at least 100,000 Chinese in three years provided the necessary steps are taken,” he said.
“The United States received two million Chinese tourists last year and their visa relaxation is indicative that the world is indeed turning to China and naturally the Chinese will respond to where they are wanted so we need to replicate such systems,” added Kaseke.
Zimbabwe’s tourism sector is slowly recovering from a decade of negative publicity on country.
Last week Tourism and Hospitality Minister Walter Mzembi said the country was targeting to attract at least two million visitors from the 200 million outbound Chinese travellers into Zimbabwe by 2020.Advertisement