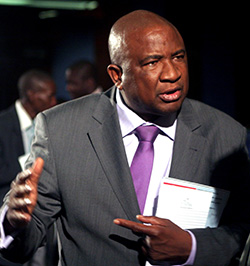 SOUTH Africa President Jacob Zuma has assured Confederation of African Football boss Issa Hayatou of the South African Football Association (SAFA) vote for another term, as the battle for the control of the continental game intensifies
Madagascar FA president Ahmed Ahmed is challenging the Cameroonian strongman in elections due on March 16 in Ethiopia and ZIFA president Philip Chiyangwa is the former’s campaign manager.
Hayatou was in South Africa on Saturday.
And according to Caf online, Zuma said he welcomed progress made in football on the continent, adding that he particularly follows the improvement in the quality of teams and the level of play.
To this effect, the South African leader remarked that he hopes to see at least one African team in the semi-finals of the upcoming FIFA World Cup in Russia in 2018.
He also took the opportunity to reiterate the commitment of his government and his personal commitment to the continued objective of his “brother” Issa Hayatou, in his mission of developing football in Africa.
Zuma thus assured Hayatou of South Africa’s support for his candidacy for a new term at the helm of the CAF.
South African minister of sport, Fikile Mbalula, South African Football Association president, Danny Jordaan, and Mamelodi Sundowns president, Patrice Motsepe, were all present at the meeting, which took place few hours to the kick-off of the Total CAF Super Cup 2016 between South Africa’s Mamelodi Sundowns and TP Mazembe of DR Congo.Advertisement