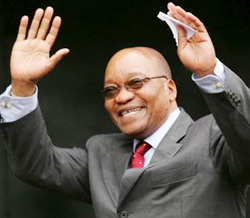 In this interview Dr Essop Pahad, a former minister in the presidency of South Africa from 1999 to 2008, speaks to President Jacob Zuma on Africa and its renaissance and asks whether the continent can be stronger, more prosperous, stable, democratic, peaceful and just
Essop Pahad (EP): Mr President, allow me first of all to congratulate you and the ANC on your overwhelming electoral victory.  In this interview, my focus is primarily on the issues and challenges facing our continent. It seems to me that there is a perception in many countries in Africa that in recent years the South African government, and yourself, are no longer deeply passionate about and committed to African unity, cohesion, growth and development, or to the African Renaissance. How do you respond to this perception?
Jacob Zuma: Africa has remained at the centre of our foreign policy. We have worked hard to strengthen support for the African Union (AU), SADC and all continental bodies whose purpose is to achieve peace and security. We have also prioritised the promotion of regional economic integration and sustainable development in the continent.
This year, we also submitted our third country report to the AU African peer review mechanism, which was well received. We also continue to support peace-making and conflict resolution. South Africa will continue to support both regional and continental processes to respond to and resolve crises, promote peace and security, significantly increase intra-Africa trade and champion infrastructure development.
Over the next five years we will continue to promote the building of a better Africa and a more just world. This will entail supporting and executing decisions of the AU as well as the promotion of the work of its structures.
EP: Do you think that Africa has a future in which it will become steadily stronger, more prosperous, stable, democratic, peaceful and just?
JZ: Yes, and it is in view of this we have continued to advocate for the strengthening of the structures of the AU to enable the continent to address the challenges of conflict and unconstitutional changes of government.
We believe the Peace and Security Council (PSC) of the AU as the organ within the African Peace and Security Architecture (Apsa) remains an effective body through which the continent responds to conflict and crisis situations. While there have been significant successes registered, there are challenges that need to be addressed as the continent strives for a conflict-free Africa. The experiences of the past 10 years since the PSC started functioning have also presented lessons learned.Advertisement