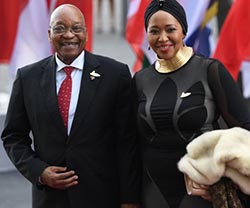 JOHANNESBURG: The Zuma family has released a statement apologising for the comments of first lady Thobeka Madiba-Zuma which she made on social media on Friday.
Taking to Instagram, Madiba-Zuma posted a picture of her and the president and captioned it “my everyday crush”.
As other users commented on the picture, she responded and said “Kuzoshuba ungalwi nomuntu ongalwi nawe”, which loosely translated means: “It’s going get rough, don’t fight with someone who is not fighting you”.
In another response to a comment, Madiba-Zuma said: “Zuma did not join the ANC in 1991, jumped ship or hip-hopped between the struggle and wealth accumulation”.
In the statement, the family says: “Over the past few hours, we have been inundated with calls from members of the public following tweets (Instagram) from an account purportedly belonging to the first lady. No amount of words can express our disappointment.”
The family also says it remains committed towards the project of nation building and expresses their confidence in the ANC leadership elected to ensure that the party remains “a vehicle to build the nation”.
Edward Zuma said: “We’ve made it clear and we are sticking to our position. Anybody who wants to take this matter further, so be it.”
She was defending her husband amid speculation that he will either be stepping down soon or shown the door.
Earlier, African National Congress President Cyril Ramaphosa said talk of an exit plan between himself and the president of the republic are in the final phase.
This article is taken from Eyewitness News.Advertisement