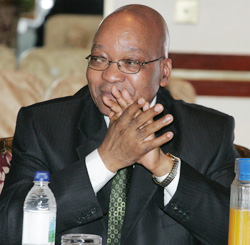 THE ANC leadership has not been able to provide reasons for recalling Jacob Zuma as head of state, the president said on Wednesday.
Zuma said that the ANC top six could not provide him with reasons for asking him to resign when they visited him at his Pretoria house on Sunday.
“I asked … what was the problem? Why must I be persuaded to resign? Have I done anything wrong? And of course the officials couldn’t provide what I have done,” said Zuma.
“I need to be furnished on what I have done. Unfortunately no one has been able to provide me with what I have done wrong.”
“Have I done something wrong? And if so, what is it that I’ve done? Nobody can give me an answer…”
Zuma said he did not think ANC leaders who kept speaking of two centres of power knew what they were talking about.
He said that they had told him there was a new mood in the country and that it had to be maintained in order for the country to move forward – to which Zuma asked if that would not be possible with him as the president.
“Once that motivation is made, that becomes even more important to hear. Have I done something wrong? Because that suggests if I’m not there, the situation would be perhaps different. What is it that I have done?” said Zuma.
He then told the top six that the matter they were raising had been raised before, including in meetings of the ANC’s national executive committee.
“The only difference is that now some of the people who were part of those who raising the issue, they are now in the leadership. They are now therefore having  authority perhaps to say this matter must still continue.”Advertisement