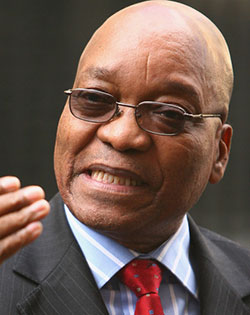 SOUTH African President Jacob Zuma downplayed tensions between his office and the National Treasury, saying perceptions they were at war are unfounded.
“There is no war between the Presidency and the Treasury,” Zuma told lawmakers in Cape Town on Tuesday. “I am saying there is no war within government and that is a clear answer, whatever perceptions people may have.”
Zuma has dismissed Finance Minister Pravin Gordhan’s request to fire the nation’s tax chief for insubordination and delayed his attempts to install a new board at the loss-making state airline. He also said he couldn’t intervene in a police investigation into allegations that Gordhan oversaw the establishment of an illegal investigative unit at the state tax agency almost a decade ago.
Amid the tensions, Deputy President Cyril Ramaphosa said last month, “when a government works well it should be a government that does not wage war with itself.”
In December last year, Zuma sparked a run on the rand and the nation’s bonds when he appointed little-known lawmaker David van Rooyen as his finance minister in place of the respected Nhlanhla Nene. The president appointed Gordhan to the post four days later, after lobbying by leaders of business and the ruling African National Congress.
Police Investigation
Police said last month that Gordhan may be charged in connection with allegations that he oversaw the establishment of an illicit investigative unit when he headed the national tax agency. The prospect of the finance chief being fired sparked a sell-off in the rand and raised speculation that the nation’s credit rating may be cut to junk by year end.
With an economic expansion of 3.3 percent in the second quarter pointing to “an optimistic outlook” and recent election results that gave the opposition control of key cities showing the nation’s democracy is maturing, there’s no reason for South Africa’s credit rating to be cut, according to the president.Advertisement

S&P Global Ratings Ltd. is due in December to release the next review of its rating for South Africa, which like that of Fitch Ratings Ltd. is the lowest investment grade.
Zuma also downplayed concerns that he was undermining Gordhan and other members of his cabinet by establishing a new committee that he will chair to oversee and coordinate the work done by state-owned companies. The panel will only ensure the companies work better together and won’t directly run projects or assume any of the responsibilities delegated to ministers, he said.