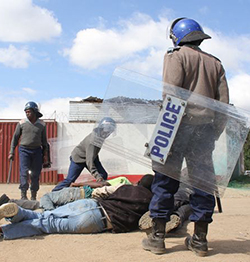 THIS madness must end! It is time to finally get rid of Mugabe and ZANU PF — and the way to do it is by a mass demonstration of public sentiment.
In the not so distant past, we watched the protests and demonstrations of the Arab Spring in the countries of North Africa and there were rumblings that a similar uprising could free Zimbabwe. It would take months of sustained public protest by Zimbabweans to bring down the government and to have people continuously protesting on the streets would be to invite a violent and murderous backlash from the ZANU PF controlled military, police and militias.
However, a mass demonstration of public sentiment we must have, and we must maintain the rage throughout the months leading up to the 2018 elections. It is time to rebel against the poverty, unemployment, economic collapse, impunity and oppression that blight the lives of ordinary Zimbabweans under ZANU PF and have forced millions of our compatriots to flee our homeland.
It is time to reject the systemic corruption and shameful looting by the ruling elite that have brought our country to its knees. The desperate plight of our country must light a fire in the bellies of Zimbabweans and fuel a simmering, controlled anger to drive a sustained mass movement that will endure through the months ahead.
ZUNDE calls on the people of Zimbabwe to mount a sustained mass public demonstration by registering and voting in numbers never seen before. ZUNDE calls on all opposition groups to unite in this campaign to inspire every eligible Zimbabwean to enrol and vote.
Faced with the prospect of looming elections, Zimbabweans must ask themselves some serious questions:

Which is better between participating and boycotting the 2018 election?
Is it not futile to participate in yet another election conducted by the ZANU PF controlled ZEC with the same inevitable rigged result?

Boycotting is not an option. A boycott would simply give Mugabe and ZANU PF a free pass to continue in power for another five years. Even if significant numbers boycott the elections, given the multiplicity of opposition parties, some of them creations of ZANU PF, there are those who will participate anyway. They may even congratulate Mugabe for winning the election thereby giving legitimacy to a flawed process and results.Advertisement

Ideally, we would want electoral reform and transparency before going into another election but we have to accept the reality of Jonathan Moyo’s often repeated assertion that Mugabe and ZANU PF are not going to reform themselves out of power. To them, a free and fair election is political suicide. We have to carry on regardless and achieve by force of numbers what we are unable to bring about by electoral reform.
Fewer than 40% of eligible voters have cast their votes in previous elections. It is the 60% who do not vote who have made it possible for ZANU PF to control the electoral process and determine the outcome. If you do not vote, it is hollow and futile to cry foul afterwards.
This time we must register in huge numbers, vote against ZANU PF in huge numbers and fiercely defend that vote if the election result is rigged. One thing that is certain about ZANU PF supporters is that they will always turn out to vote even if they do not know what they are voting for. This time it is up to the rest of us to turn things around and end the madness by turning out to vote in unprecedented numbers. That is the mass public demonstration that Zimbabwe needs.
Zimbabweans must begin this mass demonstration now by registering to vote. Each one must have the courage to do whatever it takes to register, whether you have to walk or commute to the ZEC office, whether you have to stand in an interminable line, even if you have to come back tomorrow because they have closed for today or they have run out of forms before registration even begins!
Even then your job is not done. Individually and collectively we have to maintain the rage, initially by talking to our brothers and sisters and encouraging each one to register to vote. In particular, we must talk to our youths to inspire them to register to vote. Our young people have the numbers. They are the ones who will rebuild Zimbabwe as well as the ones that are suffering the most. Some of them do not know what a payslip looks like yet they have degrees and have been looking for employment since they left university.
To those in the diaspora we say: do not accept your disenfranchisement. If your situation does not enable you to be in Zimbabwe to register and vote, you can still make the difference by encouraging your family members and friends to register now and vote in 2018.
We must maintain the rage as the months go by, talking to one another, encouraging one another, building up the momentum for a massive voter turnout on election day. That is the mass public demonstration that ZUNDE is calling for.
Of course, ZANU PF and their ZEC stooges will try to frustrate us and contrive to rig the elections once again. They have already begun by allocating more voter registration facilities in some regions or ethnic communities compared to others. They will throw up administrative and procedural hurdles and there will be inadequate numbers of electoral officers and insufficient quantities of official forms. There will be unexplained failures of the BVR machines and the process will become interminably slow. We must be determined and persistent. Each one must do whatever it takes to register to vote. It is better to be on that queue for hours than endure another five long years of ZANU PF misrule and madness.
It will be the prime role of a united opposition to mobilise the people to vote in large numbers. On election day, we must overwhelm their rigging strategy by voting in such numbers that will ensure a decisive win in real terms and we must be prepared go onto the streets to defend that vote if ZANU PF tries to rig and steal the result.
Right now, there is a sense of déjà vu in Zimbabwe. It is happening all over again — bank queues, cash shortages, queues at filling stations, groceries disappearing from supermarket shelves; all the signs are that crippling inflation is on the way, it is back to 2008 or even worse. We have already seen what happens when 60% of eligible voters fail to vote. The people of Zimbabwe can prevent that from happening again by registering and voting in numbers never seen before. Together we can do it!
Moses Chamboko is a pro-democracy activist and interim Secretary General of Zimbabweans United for Democracy (ZUNDE). He can be contacted at chambokom@gmail.com
www.zunde.org, info@zunde.org, @zundezim