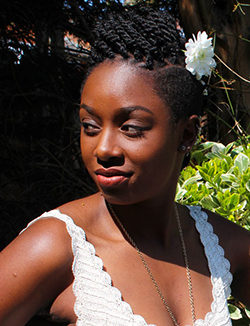 UK-BASED artist and emerging Afro-pop sensation Chashe Musarurwa-McTaggart will perform at the fifth anniversary of the Zimbabwe Achievers Awards (ZAA), which will be held in London on Saturday 9 May 2015.
The ‘Zvekupenga’ singer, who is known simply as Chashe, will head for London straight from performing at HIFA 2015 which kicked off in Harare this week.
ZAA Executive Director Brian Nyabunze said his team were putting the final touches to what will be a memorable event, with more performers set to be announced in the next few days.
“Guests to our previous events know that we have a track record of bringing exciting new artistes to their attention, and this year is no different.
“We are pleased to introduce the sassy, soulful and vibrant Chashe to our guests at this year’s event,” Nyabunze said.
ZAA Event Coordinator Colline Muchechetere, who oversees the recruitment of performers for the awards event, added: “Chashe’s a wonderful addition to the growing pool of young female talent, such as Pah Chihera, Cynthia Mare, and Tariro neGitare, who have emerged from the cauldron of talent that is Zimbabwe in the last few years.”
Muchechetere said in 2013 the ZAA introduced Zimbabwean audiences to the funky Afro-soul of London group Soneni and The Soul as well as the then relatively unknown R&B sensation, Tinashe Kachingwe.
“Since then, Tinashe has literally exploded into a global star with her critically acclaimed debut album Aquarius and the hit singles 2On and All Hands on Deck.
“And in 2014 we brought you the Afro-kissed fusion sound of Farai and The Forest Dawn, who brought the house down with their funky and energetic set,” Muchechetere said.
Chashe, who takes to the HIFA stage in Harare on May 2, is looking forward to her maiden ZAA performance and has promised to bewitch guests with her soulful, jazzy magic.
“I’m very excited of course and honoured. This will be my first performance at an awards event and one of this calibre, and I can’t wait to get up on that stage,” she said.
Rocking HIFA
“Just today I learned that Carl Joshua Ncube will be hosting, so now I’m also looking forward to some good laughs!” she added.
Interestingly, Chashe and her co-singer on Zvekupenga, Tinashe Makura, had never met until this week, and will share the stage at HIFA to perform the song live together for the very first time. They collaborated on the song remotely when Makura was based in Malaysia.Advertisement

The Harare-born Chashe says her music explores the themes of falling in and out of love, and mixes both English and Shona lyrics and culture to create her own definition of Afro Pop.
In 2012 Chashe released her debut album ‘Dhi’, a vibrant and uplifting work that was well received in Zimbabwe and got commercial radio airplay in the top 40 charts. She has recently moved from Boston to London and has a new album nearly ready to go.
“My next album is still in the pre-production phase but it will definitely be out before the year’s end. I am over the moon about it so far.”
Chashe says her biggest artistic influences at present are Stromae, Sam Smith, Calvin Harris and Dr. Seuss.
“I have been completely swallowed into the world of these writers lately and can only hope some of their atmosphere bleeds into my work.
“From Stromae’s timeless melodies and electric dance grooves with touches of afro-beat, to Dr. Seuss’ definitively unique flow of rhyme and morality, to Sam Smith and his wonderful vulnerability,” she said.
For four years Chashe worked as a professional musician and writer in the United States, mainly in the Boston area. She’s played with award winning band Zili Misik, written material for commercially released albums
‘Crossroads’ by Zili Misik, and ‘In The Flow’ by Ayumi Ueda. She has also performed at venues such as the House of Blues, Hynes Convention Centre and more.
Chashe – Dhi (Official MUSIC VIDEO)