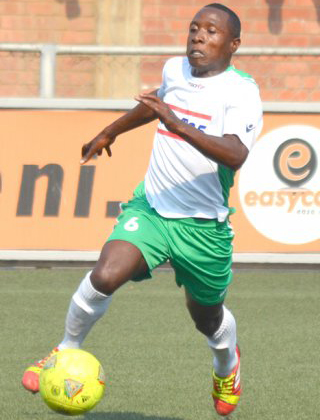 WARRIORS coach, Kalisto Pasuwa, has handed Caps United utility player Hardlife Zvirekwi the arm band to lead Zimbabwe at the African Nations Championship (Chan) football finals to be played in Rwanda later this month following the injury to skipper Danny “Deco” Phiri.
Phiri sustained a knock during the Easy Call Cup final against Highlanders last year which was Chicken Inn’s last match but has not recovered leaving Pasuwa with no option but to send him back home.
The coach said said Zvirekwi, who is the only survivior from the squad that took part at the last edition of the Chan tournament held in South Africa would skipper the team.
“Zvirekwi is an experienced player,” explained Pasuwa.
“He played at the previous tournament in South Africa and we have given him the arm band to lead the team in Rwanda because Danny has not recovered.
“I have been trying to manage him but it has failed. I am sure he will leave up to the expectations of the entire nation.”
Zvirekwi said the team would miss Phiri but revealed they willl go out there to try and win the tournament.
“I have been to the Chan finals; it’s unfortunate we lost Danny. We will miss his experience but we also had the same experience last year,” he said.
“What is important when we go there is for us to fight to make the nation proud. It’s an opportunity to market ourselves, but if we think about that we are likely to lose focus.”
He conceded that Zimbabwe were in a tough group. The Warriors are in Group D alongside, Zambia, Mali and Uganda, and Zvirekwi believes theirs is the toughest group.
“Ours is the group of death, but we are still saying to ourselves we should go there and finish top of the group. We have been working hard, we have two field and two gym sessions each day,” said Zvirekwi.
“At first it was tough, but we know we have to put so much work in training here because there is not much time for training when you are at the tournament. It is important to get our fitness levels high and I think we are getting there.”
The Warriors are expected to leave for Rwanda on or around January 10 via Ethiopia, where they will play a warm-up match before they proceed.Advertisement