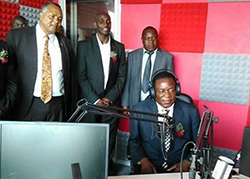 ALL is not well with Zvishavane’s first commercial radio station Ya FM which is reportedly struggling to pay staff and buy equipment for use by disgruntled employees.
Speaking on condition of anonymity, an employee told NewZimbabwe.com Thursday morale was at its lowest at the station, which went on air only less than two months ago.
Despite the hype that followed the September 25 launch of a radio station servicing the small mining town and its surroundings, it has emerged that poor working conditions have taken centre stage with staff using plastic chairs in an almost empty newsroom.
“Everyone has lost the drive and passion they had when we started,” said the source.
“People just come to fulfil their duties and go home. DJs have resorted to hosting shows at some night clubs in town to survive.”
Employees, according to the source, received offer letters in September this year with some presenters given two weeks’ probation while others were given three months.
This was followed by some three weeks’ training in Zvishavane town while the studio was being put together.
“They had promised to pay us half salaries for the two weeks of training. However, they changed goalposts and paid people half of what they had promised,” said the source.
“For the month of October, we were only paid $100 and the same with November. It is likely going to be the same in December.”
Station CEO Munyaradzi Hwengwere is adamant the station should generate its own money to pay salaries.
Hwengwere and some unclear investors have not been willing to pour funds to cover salaries and other running costs, it is further alleged.
The former ZBC CEO has held several crisis meetings with his workers but keeps saying he could not pay them enough as he was waiting for monies from companies that have placed adverts to start paying.
One of them is power utility Zesa which is said to be owing $20,000.
Hwengwere could not be reached for comment but station manager Tafara Mbaya laughed the allegations off, saying that the station was still too new to be said to be defaulting on salaries.
“We only started in November and how can we be said to have failed to pay salaries,” he said.
“That is impossible. Just tell your source to be honest with you and tell you the truth.”
Ya FM is one of the eight area commercial radio stations granted broadcasting licences by government few months ago.Advertisement

It was launched September this year by Vice President Emmerson Mnangagwa and started live broadcasting September 28.