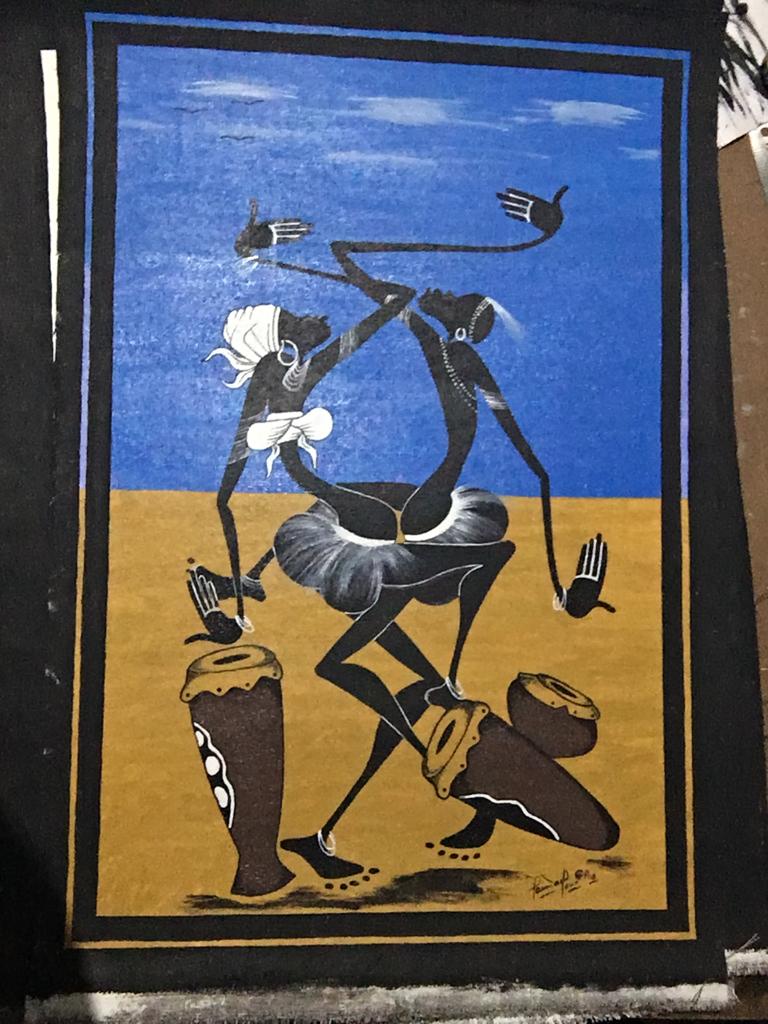 MULTIPLE talented artist, Claudious Machiridza, also known as Bulliun in the entertainment industry, has produced a painting which evokes memories o the rich practices of traditional dance of Jerusarema.

“This piece is about the long forgotten Jerusarema dance. It reveals how people long ago used to entertain themselves and the audience.

“Due to modernisation, a lot of history is being lost, youngsters are now spending most of their time in the digital world, so with this type piece anyone can narrate a story to the upcoming generation on how entertainment used to be and how norms and values were preserved,” he said.

The Mbende Jerusarema Dance is a popular dance style practiced by the Zezuru Shona people living in eastern Zimbabwe, especially in the Murewa and Uzumba-Maramba-Pfungwe districts.

The dance is characterised by acrobatic and sensual movements by women and men, driven by a polyrhythmic drummer, accompanied by men playing woodblock clappers and by women handclapping, yodeling and blowing whistles.

Unlike other drum-based East African dance styles, the Mbende Jerusarema does not rely on intricate foot stamping or a large number of drummers.

Instead, the music is performed by one master drummer, and no songs or lyrics are involved.

Recently, Bulliun also completed a piece work with beads, jewellery and fine cloth, which were regarded as a sign of wealth and the baskets balanced on the women’s heads is a sign of hard work.

“I have two other pieces which are an appreciation of the significant positions held by women in different sectors, who work tirelessly towards the prosperity of our country Zimbabwe.

“The other piece conveys the need to safeguard our natural environment depicting the spears and the shield. The few trees depict that deforestation is destroying our natural land and animals,” he said.

He said some of the pieces he has produced in the past were sold at Harare International Festival of the Arts (HIFA) in Zimbabwe, some in Australia’s Orange State and Wagga Wagga with the others at some cultural events held time and again over there for people to showcase their cultures.

The artist has also made online inroads on the internet and hopes to sell more pieces through digital platforms.

Bulliun is also into dancehall music and he recently released a single track, which raises awareness on the need to do away with drugs in the ghetto.