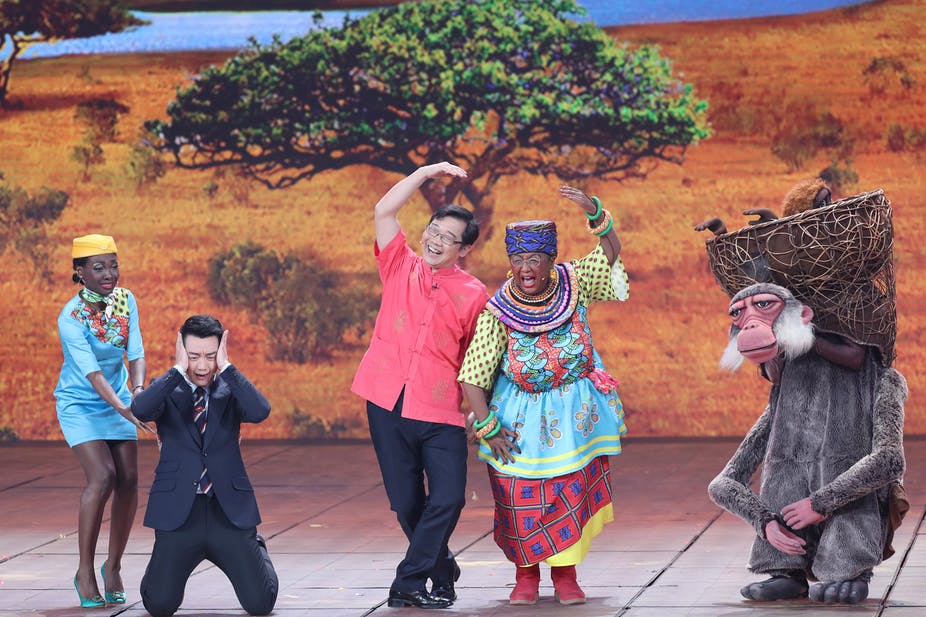 FOR most Chinese people, the Spring Festival is a time to honour family ties, friendships and acquaintances.

This is what producers of this year’s Annual Spring Festival Gala on China’s national broadcaster, CCTV, probably had in mind when they agreed to include a comedy skit about the growing ties between China and African countries called “Celebrating Together” (同喜同乐).

In a celebration of Sino-African friendship, what could go wrong? In fact, quite a lot.

The 13-minute long skit opens with dozens of African performers, alongside antelopes and a lion, dancing to the tune of Shakira’s “Waka Waka”, all rejoicing over the opening of the China-built Nairobi to Mombasa Railway. They are joined by a group of Kenyan train attendants and the female lead, a Gabonese actress speaking fluent Mandarin.

And, then, a well-known Chinese actress in full blackface comes on stage wearing a colourful yellow dress, fully equipped with oversized butt pads, carrying a fruit plate on her head and leading a cheerful monkey played by an unidentified African actor.

In less than 12 hours, descriptions of the skit were all over international media – always ready to run a “China, the foe” story. Turning to the Twittersphere, the public opinion thermometer of the 21st century, journalists found a divided audience: many called it racist, others argued it was not.

The skit might not have been ill-intentioned. But it was both culturally and racially insensitive. It also reeked of propaganda and relied on all the stereotypes about Africa that Chinese media claim to be debunking in their public diplomacy activities in the continent.

It is not the first time that a Chinese state-sanctioned production has misrepresented Africa and African people in such a grotesque way. Last summer, the movie “Wolf Warrior 2”, the highest-grossing Chinese film ever, managed to bring together in a single movie all the clichés of Hollywood’s white-saviour subgenre: an unnamed African country affected by a deadly disease descends into chaos as civil war erupts. That is, until a Chinese mercenary comes to the rescue.

All film scripts in China must be pre-approved before production starts and they must get a final green light before they’re released. CCTV’s Spring Festival Gala also goes through multiple stages of supervision. Sometimes movies and TV acts are tossed out because a red flag is raised. That clearly didn’t happen this time.

Neither “Wolf Warrior 2” nor the Spring Festival Gala were conceived with global audiences in mind. They are cultural artefacts that speak to domestic audiences and, as such, they are tuned to the so-called “main melody”, a concept often attributed to China’s President in the 1990s, Jiang Zemin. Cultural products that dance to the main melody need to be aesthetically attractive to the masses, but remain politically aligned with the doctrine of the Communist Party.

China has a different repertoire for global audiences. As part of its quest to improve its image overseas, Beijing has promoted the expansion of companies like CGTN, Xinhua, China Daily and StarTimes. All have a strong presence in Africa, where they claim to be presenting a different view of the continent and its people.

These efforts are hit hard every time a gaffe, such as the CCTV’s skit, goes on air.

Chinese media portray Africa in stereotypes not dissimilar to the rest of the world. The continent is routinely treated as a single unit, erasing its linguistic, racial and cultural diversity. It is often associated with cliched images such as savannas and safaris and its transformations over the last 30 years reduced to a market logic under the tagline “Africa rising”.

While misrepresentations of Africa are not an exclusive problem of Chinese media, two things set China apart.

As the release of “Black Panther” has shown, many in the US are ready to engage in an open discussion about how the US movie industry has, for decades, failed to address racial biases.

In China, criticism of the CCTV African skit on social media has been censored. This is not surprising, given that, every year, Chinese censors work hard to erase negative comments of a show that has gone from being a must-watch for many Chinese families to a source of memes and jokes for younger generations.

This suggests that China needs to have a conversation about racial insensitivity, which is too common and too often dismissed as cultural specificity. The cultural specificity argument goes like this: while something might be considered offensive in the “West” (for example, blackface), it is not in China, and, therefore, there is no need to feel offended by it.

For a long time Beijing has kept a double narrative going in its media strategy – one for domestic consumption and another one for global audiences. This worked in a pre-Internet era.

If China wants to be viewed as a responsible global actor, it needs to find appropriate ways to prevent controversies such as the one created by the offensive CCTV skit. It could, for example, seek out African specialists at Chinese universities to offer expert advise.

More importantly, when errors are made – and Chinese leaders need to accept that nobody is infallible – Beijing needs to be ready to acknowledge them.

Foreign companies, and sometimes foreign media, are forced to issue an apology when their actions are deemed to hurt Chinese people. Will CCTV be offering one? For now, that seems unlikely. Speaking to the press, the Ministry of Foreign Affairs has dismissed the controversy and taken the usual path: attacking those who brought up the issue.

Next time Beijing may want to change its approach. By apologising, it would show the world that it is becoming an empathetic global power.

This article is taken from The Conversation.