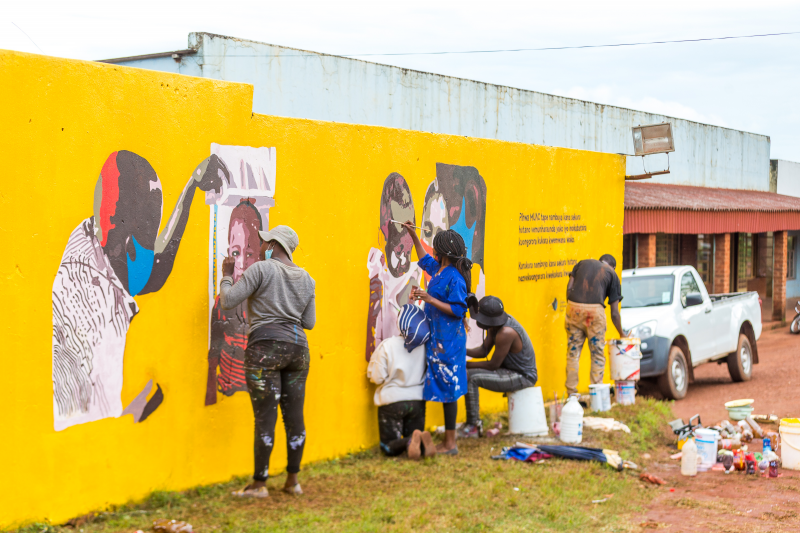 CHIPINGE: With each fresh coat of paint, the old, brown garage wall, slowly comes to life.

As the rust peels off, the painting of the mural becomes more vivid and Chako Shopping Centre in Zimbabwe’s eastern district of Chipinge is left abuzz.

Petronella Charlie, a 21-year old upcoming artiste and her peers use a combination of red, yellow, white, green and brown to imprint the images on the large wall.

Curiosity turns into animated conversation as people try to figure out the meaning of the mural as it is painted.

“I think that is a hand of an older person directing a child to go fetch something,” said a man, as the crowd – practicing social distancing – slowly observed.

“No,” interjected a woman, holding a hoe after briefly abandoning weeding her maize field nearby.

“Can’t you see the older person is wearing a mask? This is about Covid-19 prevention,” she said, adjusting her own mask.

“This is about children’s health, that’s why we have the child and the tape measures there,” chipped in another woman.

In one image, a caregiver is seen measuring a child’s height.

In another, caregivers monitor a child using a Mid-Upper Arm Circumference (MUAC) tape to identify malnutrition.

All adults in the mural are wearing masks as part of Covid-19 messaging.

The mural is one of more than 10 planned for Manicaland, Mashonaland East and Masvingo provinces. 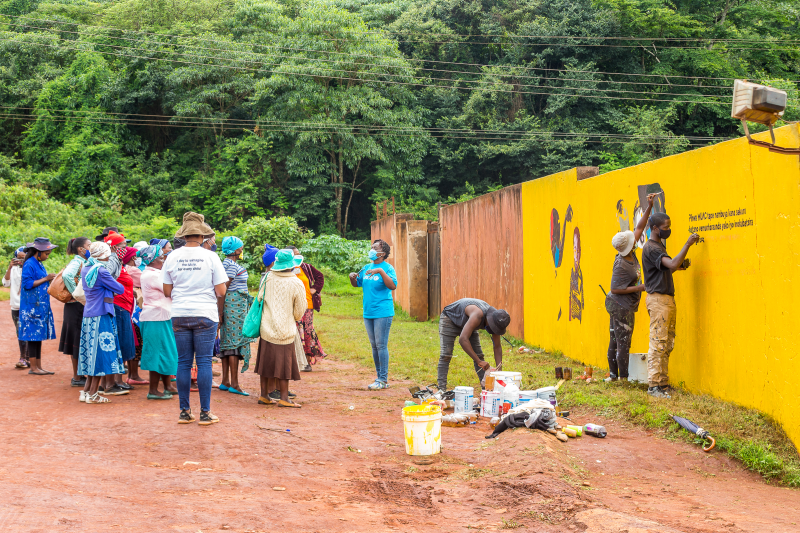 The three provinces were most affected by Cyclone Idai in 2019 and are now benefitting from the World Bank funded, Zimbabwe Idai Recovery Project (ZIRP).

The outdoor media campaign is targeting nearly 2.5 million people, including 400 000 children and 200 000 pregnant and lactating women in the three predominantly rural provinces.

Tsitsi Nyanhete, the Chipinge health ministry district health promotion officer, was are excited about the potential reach of the campaign.

“This is where people from all corners of the district converge. Everyone passes through these shops at some point, and I am sure this will catch their attention,” she said.

“Just by looking at the images they will understand the message. Images are also good in that even those who can’t read can still get the message. Very few people have access to radios or TVs and newspapers here, so this serves a very good purpose.”

At Chako shopping centre, the enthusiasm was easily noticeable.

One woman said the mural reminded her of one she had seen earlier on malaria prevention.

“Once you see the pictures, you never forget,” she said.

Others were fascinated by the combination of colour, images and words to engrain health messages in the community’s conscience.

“The colours are bright, you can’t miss it,” said a man buying fuel at an adjacent petrol station,” he said.

“Protecting the wall and spreading the message at the same time, what a clever way to save lives.”