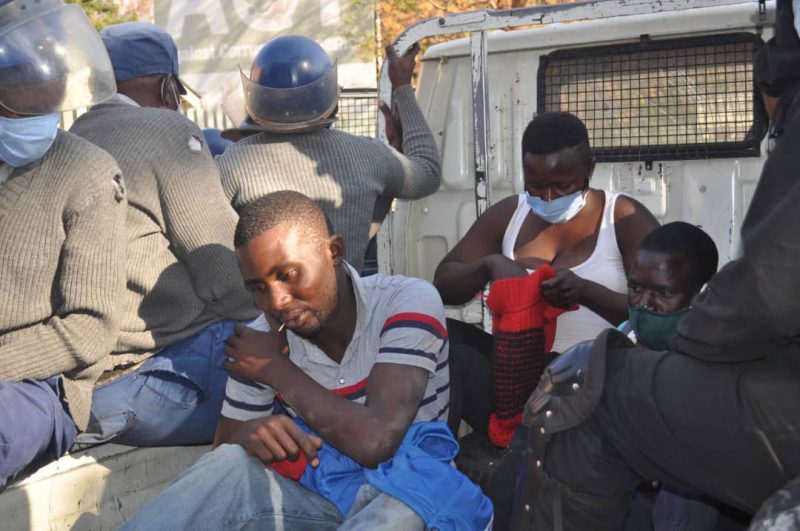 Opposition activists arrested after staging a demo at Harare Magistrate’s Court in solidarity with their MP Job Sikhala, who was arrested on charges of inciting public violence
Spread This News

THE Zimbabwean government has remained steadfast in its defence against accusations of human rights abuses and the suppression of dissent amid growing international condemnation by human rights groups, diplomats and legal fraternities across the globe.

In the past week, human rights lawyers in Zimbabwe representing jailed activists have been arrested, denied access to represent activists or assaulted by police at courts, while ordinary citizens who continue to speak against injustices are being arrested.

“I don’t have the authority to intervene over court processes and I don’t know whether in their countries, if the case is before the courts an executive order can be issued to stop proceedings. So, I don’t know where I can get the authority even to contemplate doing that without them [RFK Human Rights] alleging that we interfere with the independence of the judiciary.”

Kennedy called for authorities in Zimbabwe to, “secure the immediate release of investigative journalist Hopewell Chin’ono from arbitrary detention and for the baseless charges against him to be dropped”.

The letter also asked the same for politician Jacob Ngarivhume who was arrested together with Chin’ono, and all journalists currently detained by the government of Zimbabwe.

Kennedy further extended the call to President Cyril Ramaphosa, urging him to “work with members of the African Union to secure the release of journalists and media personnel in Zimbabwe”.

An excerpt from Kennedy’s 24 August letter to Ramaphosa reads, “The world is watching how Zimbabwe treats Chin’ono and others it has put behind bars. We join the calls for their immediate release that have been put forth by human rights and journalism organisations.”

The RFK Human Rights letter is the latest international protest following at least 65 NGOs and 67 individuals who have expressed grave concern over the barring of lawyer Beatrice Mtetwa from representing Chin’ono – a CNN-award winning journalist and Nieman fellow – and the suppression of dissent in Zimbabwe. Chin’ono was arrested following his unrelenting social media posts on corruption in high places and the call for citizens to act.

The court order requires ZPCS to allow Chin’ono and Ngarivhume access to food, personal protective equipment (PPE) and the right to privacy with their lawyers. During Chin’ono’s last court appearance on 24 August, after being denied bail for the third time, prison officials kept a close check on him and his lawyers, not allowing any private conversation.

Following the barring of Mtetwa from being Chin’ono’s legal counsel of choice, prison authorities have denied her access to the jailed journalist regardless of the fact that the court allowed her to be part of the legal team. Mtetwa was on Tuesday 25 August verbally harassed by police officers manning the Rotten Row Magistrate’s Court in Harare and was refused entry into the court premises.

Mtetwa told Daily Maverick: “I feel very frustrated. I just got a letter from ZPCS stating that I am not allowed anywhere near the prisons to go and see Hopewell. You can see the choreography of all this barring.

“It’s clearly unlawful and the attempt is to make life difficult for some lawyers. I am annoyed that this continues to go on but I am not going to be deterred in any way.”

Commenting on the treatment of Mtetwa by authorities, constitutional lawyer and University of Zimbabwe law lecturer Professor Lovemore Madhuku said, “It’s a very unfortunate development. What has to be looked at more seriously is where that is coming from. I think that has to be thoroughly investigated, but the situation where lawyers seem to be unable to represent their clients must be condemned.”

Chin’ono will appear in court on Thursday 27 August for his bail appeal, while Ngarivhume’s trial begins on September 4 after he was denied bail for the third time on Friday 21 August. The two men have been held without trial for 37 days since their arrests on 20 July in Harare.

Opposition MDC Alliance vice-chairperson and member of Parliament for Zengeza, Job Sikhala, was arrested on Saturday 22 August and charged with inciting people to commit public violence. Sikhala is one of the 14 persons on the police wanted list in connection with the #31stJuly planned protests.

Sikhala’s lawyer, Jeremiah Bamu, was on Monday arrested outside the Rotten Row Magistrate’s Court on the basis that he was “loitering around the court building”.

Bamu told Daily Maverick, “It’s expected in the situation we are in right now, although it is not desirable.

“We are in a situation where most state institutions have gone off the rails and exhibit disregard for the law and due process. They are acting irrationally without giving much thought to the actions they are taking, mainly the police and prison authorities.”

During his first appearance in court, on Tuesday 25 August, Sikhala complained to the magistrate about threats made to him by prison authorities, whom he alleges asked for his next-of-kin details so that they could arrange for his funeral because he was going to die in prison.

Sikhala also submitted that he was put in the condemned prisoners’ section, where 11 inmates had tested positive for Covid-19 and the cells were not fumigated, and that he was not given access to PPE, including hand sanitiser.

Chin’ono, Ngarivhume and Sikhala have all been detained at the Chikurubi Maximum Security Prison, where convicted criminals are kept.

Youth leader and MDC Alliance councillor Godfrey Kurauone was arrested for singing a song that denounced President Emmerson Mnangagwa and charged with “undermining the authority of the President”. Kurauone was remanded in prison until 24 September.

Another MDC Alliance councillor in Hurungwe, Lavender Chiwaya, was killed and his body dumped outside his house on 21 August, a few weeks after he went into hiding ahead of the #31stJuly nationwide planned protests which failed to take off amid the heavy presence of security forces.

Amid the ongoing unsolved murders of political activists, arbitrary arrests, abductions, torture and general heavy-handedness by uniformed forces in matters of perceived civil disobedience, Mnangagwa is calling for dialogue on the “Gukurahundi massacres” committed at least three decades ago.

After assuming power in the military-assisted ousting of the late Robert Mugabe in November 2017, Mnangagwa promised political and electoral reforms, but his government is moving towards lawfully criminalising dissent in the troubled country.

The courts are busy with endless litigations of activists and lawyers, while the country’s economy continues to deteriorate, with inflation rising from 750% to 857%.