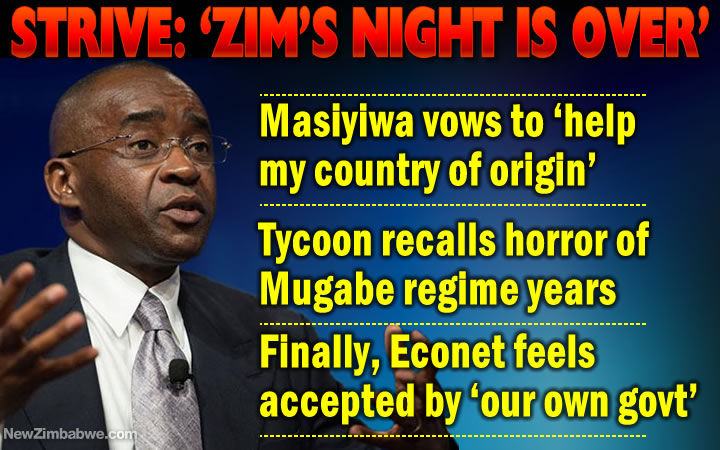 Zimbabwe’s night is over, and we must work together now to bring in the dawn. We must work hard to turn away from (and learn from) the pages of our pained past.

EXILED business magnet Strive Masiyiwa has poured his feeling out in the wake of a visit to his company’s exhibition stand at the just concluded Zimbabwe International Trade Fair by Vice President Constantino Chiwenga.

Masiyiwa said Chiwenga’s visit left him feeling accepted by government something he has become unaccustomed to, given the Zanu PF administration’s negative and scornful attitude towards him under former president Robert Mugabe.

In Facebook interactions with his global followers, Masiyiwa said of Chiwenga’s visit: “A few days ago when the Vice President of Zimbabwe Mr Constantino Chiwenga visited our stand at a national trade show you cannot imagine how appreciative we were of the gesture.

“Even though our company is the largest single employer of our fellow citizens it was the first time we had felt accepted by our own government.”

The tycoon then went down memory lane, giving vivid descriptions of how Mugabe’s administration hounded him across the world.

Initially Masiyiwa said he was denied a new passport while State security agents trailed him to no end.

“When my passport ran out the passport authority refused to issue a new one without giving any explanation,” he revealed.

“I was forced to approach the Constitutional Court and it was only after the court set down a hearing that the authority suddenly relented and released a passport.

“For over a year I was virtually stateless. My battle to get a passport was not published in newspapers. One day (time permitting) I will write about this little saga. I left Zimbabwe in 2000 and the first year after that was particularly difficult.”

He added: “The State seemed to spare no expense in sending people to follow me wherever I went.

“For instance, like most business people I usually stayed at the same hotels as this leads to discounts on the rates (tip for you). But in my case, it meant ‘there are certain guests who are here with you’ as one hotel employee told me quietly.

“Then I had to change how and when I travelled. At times it was very embarrassing for the agents when they realised I was aware of them following me as happened at a hotel in London. I simply went to them and greeted them politely in our local language, then went away!”

While some have suggested globally respected entrepreneur has developed a “cold heart” towards his native Zimbabwe, Masiyiwa said he was ready to help, but would not allow people to prescribe the nature of his assistance.

“With many of us in the diaspora, living and working outside our home country having left almost 20 years ago, it is not always realistic to expect our permanent return given that we have now built our lives elsewhere.

“Nevertheless, it does not mean we cannot contribute from where we are. We can do much. Personally, I will leave no stone unturned to help my country of origin, in my own way even as I have always done.

“Respectfully, I feel I have also earned the right not to have other prescribe to me how and with whom I should contribute.”

The Econet founder has had to fend off reports that he was eyeing a return to the country to lead a political outfit including, at some point, claims he was ready to take over the leadership of the opposition MDC-T.

Such reports only helped to deepen Mugabe’s distrust of Masiyiwa, but things seem to have turned a corner after the veteran leader was ousted in a coup last November.

Mnangagwa has adopted a new policy thrust that seem to favour business with Masiyiwa now a beneficiary of the new administration’s direction.

Masiyiwa struggled to establish his business after Mugabe tried to block his bid for a license in the late early 90s.

Mugabe’s administration also repeatedly accused Masiyiwa of funding opposition activities in the country, resulting in relations between one of the country’s biggest employers and the State at breaking point.