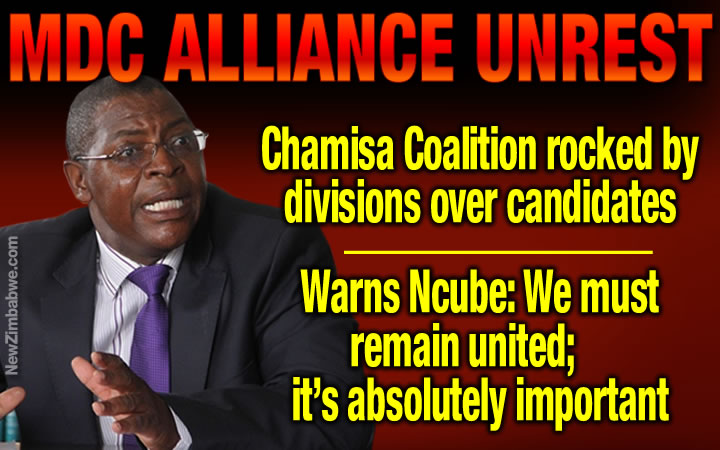 AS the nomination courts sit countrywide, confusion and disagreements continue to rock the opposition MDC Alliance with principals reportedly failing to reach a consensus on candidate selection in some constituencies and wards.

Members of the dominant MDC-T party are reportedly refusing to accept alliance candidates and going ahead to contest constituencies and wards that had been reserved for the smaller parties.

Transform Zimbabwe leader Jacob Ngaribvume has accused the MDC-T bullying its partners and breaching the candidates-sharing agreement reached when the Alliance was formed.

Coalition leader Nelson Chamisa reportedly kept co-principals waiting at for a meeting scheduled called to try and resolve the disagreements.

Sources said when he eventually turned up at the former Harvest House party headquarters, some his colleagues had already left.

However, in an interview with NewZimbabwe.com Wednesday evening, alliance spokesman Professor Welshman Ncube insisted that the selected candidates would file their nomination papers.

“Eventually, candidates will be selected,” he said.

“Yes, we are going into the nomination court and there will be a lot of disgruntlement and disappointment among candidates.

“With or without disagreements, we are still going to file our papers for the candidates at all levels.

“There will be unhappiness by those who will not have succeeded in being nominated but, that does not mean will not file our papers; we will.”

He admitted that there have been challenges in the candidate selection process between the seven Alliance principals.

“We have huge numbers of candidates who want to be MPs, councillors, those on the Senate list and the House of Assembly women list,” he said.

“Now we just have to confront those people who are interested in these positions. Some are challenging the primaries outcomes and want to reopen each and every case.

“This has given us challenges on the administrative side since we had to spend so much time trying to resolve the issues and see what we will do by the nomination court.”

He added; “I am not worried about the issue of double candidate. Even if it happens in one or two constituencies, there will be a solution.

“As principals met today (Wednesday) to try and resolve these issues, we managed to agree in some cases and in some, we did not, but that is life and there will be candidates for selection Thursday (today).”

The former industry minister challenged the Alliance principals to remain united and keep the coalition together.

“Yes, there is unhappiness in the manner in which we have handled some of these issues, but Zimbabwean people deserve to be given a chance.

“We must remain united; it is absolutely important that we keep the Alliance together because the MDC Alliance is the only alternative that Zimbabweans have.

“We need not divide votes and go separate ways.”