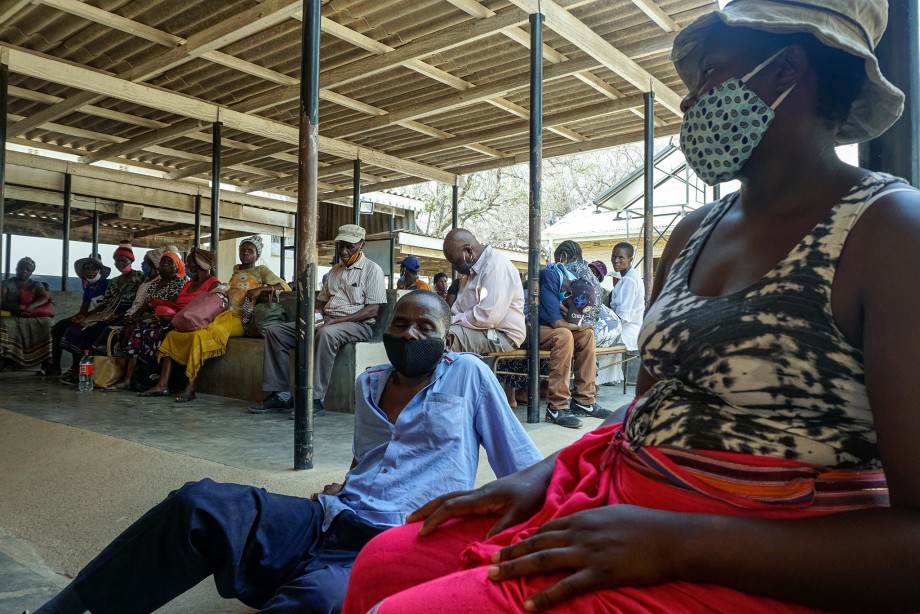 Mount Darwin: One recent evening, men, women and children crowd a dusty, windy space on the grounds of Karanda Mission Hospital, about 200 kilometers (124 miles) north of Harare, Zimbabwe’s capital. They are patients with their loved ones.

Having traveled many miles, they brought camping tents, blankets, pots and pans. Some people cook and talk. Others sit on mats or on dirty cardboard boxes. For the days — or weeks — that they’re here awaiting treatment, this spot is home.

Ndaizivei Makaza, a mother of five who lives in Mutoko, 290 kilometers (180 miles) away from the hospital, came because of continuous menstrual bleeding. After each long day of tests, she and her mother return to their cardboard box, where they relax with tea and bread. Makaza has been here almost a week.

“The service I have gotten here is exceptional as compared to government hospitals that I have previously gone to,” says Makaza, 49.

Makaza’s story is an increasingly common one. As Zimbabwe’s public health system has fallen apart in recent years, a growing number of patients in cities have flooded mission hospitals in rural areas, often leaving the small, church-funded facilities overwhelmed.

Since 2019, doctors and nurses in government hospitals have repeatedly gone on strike, citing poor working conditions. In public hospitals, medical equipment is often outdated or nonexistent. It can take weeks for a patient to see a doctor.

Most mission hospitals went up after the country won its independence from the British in 1980. The government decided to partner with the Zimbabwe Association of Church-Related Hospitals on health programs and services, according to research by Eric K. Makombe, a University of Zimbabwe lecturer in economic history and other subjects. The hospitals supplied health care to rural areas underserved during the colonial era.

By 2017, there were 65 mission hospitals in Zimbabwe, along with 120 public and 32 private hospitals.

Today mission hospitals deliver 68% of the health care in rural Zimbabwe and 35% nationally. They are funded by various churches and denominations.

Dr. Paul Thistle, Karanda’s medical director since 2012, says in recent months, the number of patients coming to his hospital has tripled.

Thistle notes two factors: the loosening of travel restrictions related to the coronavirus pandemic prior to another national lockdown in November and intermittent strikes by doctors and nurses in public hospitals.

“The reality is Karanda was not designed or built to provide service to the whole country,” he says.

That didn’t stop Marian Masiyiwa and her father, who traveled to Karanda Mission Hospital from Goromonzi, about 240 kilometers (149 miles) south. Her father has prostate cancer.

“There are no doctors in public hospitals,” she says. “This is the first place we have had access to doctors and got treatment for my father.”

Thistle says the hospital’s four doctors and 70 nurses care for about 300 people a day and try to never turn away patients.

The Evangelical Church of Zimbabwe partially funds the hospital, as do consultation fees, which are based in part on how far a patient has traveled. Patients from farther away pay more, Thistle says.

Dr. Massimo Migani, medical superintendent at All Souls Mission Hospital in Mutoko, says his facility receives patients from as far as Harare, 142 kilometers (88 miles) away.

Many patients suffer from issues other than the coronavirus. Zimbabwe has seen far fewer cases than South Africa, although a new, fast-spreading strain in the neighboring country could put more Zimbabweans at risk.

The onslaught has strained All Souls’ five doctors and 45 nurses, Migani says. The hospital doesn’t charge patients based on how far they’ve come. “Some patients have to wait for weeks, and some even months before they get treatment or surgery procedures,” he says.

Chipo Banda came 110 kilometers (68 miles) to Karanda, hoping its staff could fix her 20-year-old son’s hernia. But the teacher says the $600 surgery was so expensive, she must use savings and take loans from relatives.

“We wonder if this is still a mission hospital, or now it’s operating like a private hospital,” Banda says.

Edna Murwira Pachena, 60, lives in Rushinga district, 67 kilometers (42 miles) east of Karanda Mission Hospital. She says overcrowding affects locals. “I came here thinking that I would be attended to on the same day, but that was not the case.”

Pachena, who has a growth in her mouth, also was upset with the operation’s $800 price. She says she must sell three cows to come up with the money.

Priscilla Mupotsa, 61, traveled from Chitungwiza, about 220 kilometers (137 miles) from Karanda Mission Hospital. Her husband needed surgery at Karanda related to his prostate cancer.

Mupotsa and her husband stayed for two weeks at Karanda, where they became friends with Makaza and Makaza’s mother.

Makaza finished her tests, which cost $100, but she didn’t have money to return for the results or treatment. Still, she refuses to try a public hospital. Instead, she plans to resell used clothes to raise funds.

“Until then,” she says, “I have to be patient and manage my sickness from home.”

Linda Mujuru is a Global Press Journal reporter based in Harare, Zimbabwe. She specializes in reporting on agriculture and the economy.