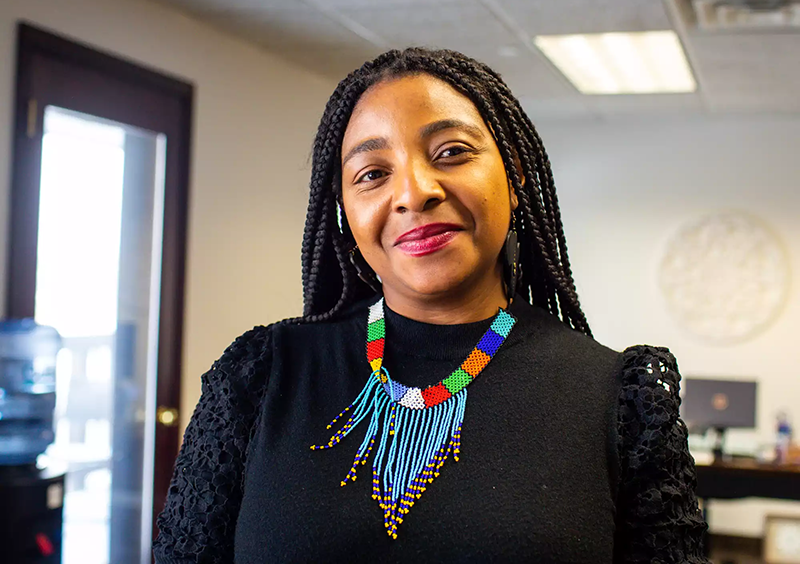 “I wanted a place where women could walk in and say, ‘Everything has been designed with me in mind’,” she said.

There are five bedrooms, two kitchens, and intentional decorations chosen by the women living in each of the rooms.

Priscilla Caballero gave tours of the home, including her cheetah print-themed room.

“I wanted everything to match from the pillows to the candles to the pictures.”

Caballero just moved into the Phumulani healing home about one month ago with her 17-year-old daughter. A survivor of domestic violence, Caballero now works for the nonprofit Phumulani as a housing navigator for other survivors.

“It’s very rewarding to know you can do that for somebody,” Caballero said. “I’m just thankful for Comfort to even have that possible here.”

Phumulani’s mission is to prevent domestic violence in communities of color and immigrant communities throughout Minnesota. Phumulani means “lover of peace” in Zulu, and it is also the name of one of Comfort’s three children, her daughter.

The idea for Phumulani came in the middle of one night in 2018. Dondo had left her then-husband and was staying with friends because she felt shelter spaces were too restrictive and did not address individual needs of families.

“My children were sleeping on the couch and I was on the floor,” Dondo recalled. “I wanted to create a space that would relieve my pain, where I would gather other African women and talk about how many were going through what I was going through being unhoused with kids.”

Dondo, who had studied nutrition at St. Catherine’s University in St. Paul after arriving in Minnesota from Zimbabwe in 2004, got to work building something completely outside of her comfort zone.

“These were just circles like we did in Africa, where we have attire, we had tea and talked,” Dondo said. “I interviewed 200 women, and I asked them why they are staying in abusive relationships and shelter kept coming up.” 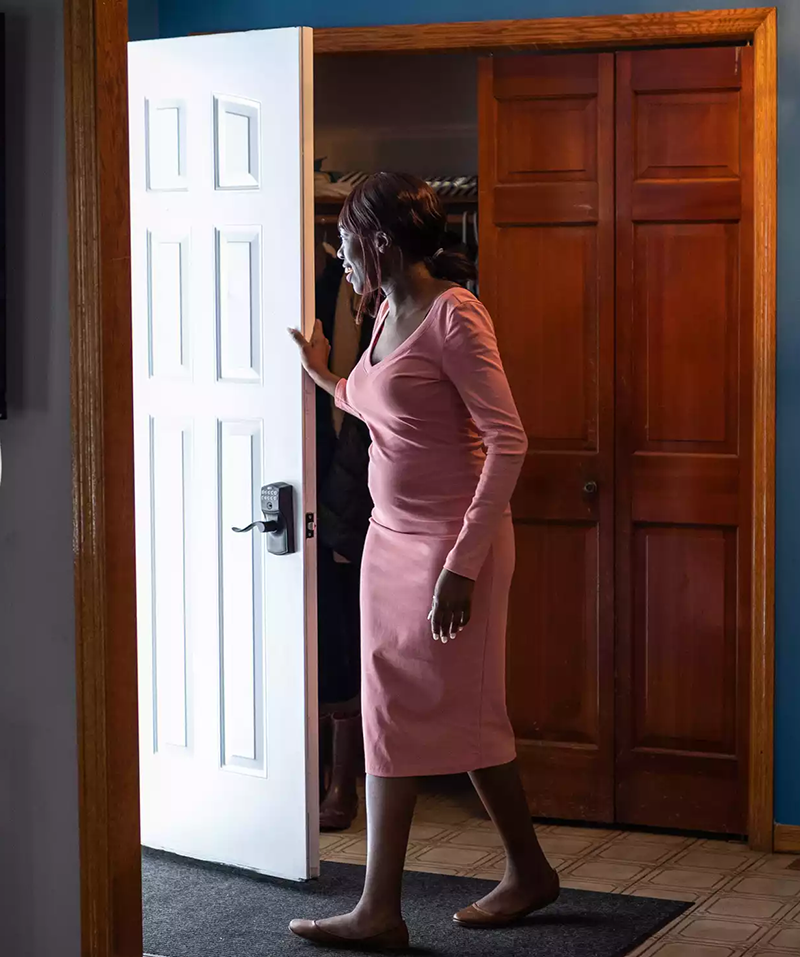 Dondo said women leaving their abusers often struggle with bad credit and barriers to finding work and housing because of financial abuse.

“Sometimes it takes up to seven times for a woman to leave,” Dondo said.

For women from immigrant communities, Dondo explained family sizes, caring for elders and culturally-specific foods can also be among the barriers to finding adequate shelter and housing.

“Some of the women that are coming through your doors are coming from war,” Dondo said. “So to have someone stay with another person who they are not familiar with could be retraumatizing.”

By 2019, Dondo was leading healing circles, building Phumulani and pursuing a master’s degree from the University of Minnesota’s Humphrey School of Public Affairs.

“I was staying between my car and cheap motels,” Dondo said. “I had found ways to cope and show up not looking like I was homeless.”

Dondo said that was when a friend from church reached out to her.

“She took me for lunch and it took about two hours to convince me to say that was what was happening, because of the shame around it,” said Dondo.

From there, Dondo remembered her friend drove her to the house that would eventually become the Phumulani healing home.

“She removed the ‘for sale’ sign and she says, ‘Welcome home. You’re going to stay in this home. I’m giving you a month to figure yourself out. Rent will be $3,000 because that is what it takes to keep the electricity on. I know you have it in you to come up with that.’ I was in shock.”

Dondo worked hard from inside the home to create several streams of revenue for herself, including a skin care line and consulting business. After about six months, Dondo was able to rent the home, and she bought it in January 2020.

“I really healed inside that home,” Dondo said.

Dondo wanted to pay it forward and turn the house into a home for a handful of other women in need of a holistic approach to healing and independence.

“When a woman is going through domestic abuse, she already has had some trauma as a child in most cases, and I think a constant for most of the women is they have been told they are not worthy,” Dondo said.

Dondo found grants and philanthropic resources to sponsor major renovations to the single-family home, including through the Greater Minnesota Housing Fund, where Dondo was selected for the Emerging Developers of Color Program. Dondo received $50,000 for renovations through the program, which helps people of color grow as affordable housing developers.

Irene Ruiz-Briseño is the program manager for the Emerging Developers of Color Program.

Ruiz-Briseño said more diverse representation and flexible funding options like the ones Dondo accessed are needed to reduce racial disparities in the affordable housing industry.

Dondo said the women living in her home get individualized financial coaching to be able to pay what they can in rent. The goal is for the women to move out on their own after about one year.

Importantly, Dondo said the women living in the home also get to set their own ground rules as a household based on their own cultures and needs.

“It’s a very decolonized space and that’s really important for me,” Dondo said. “I believe that oppression is when you assume you have the solution for someone else.”

In a handful of years, Dondo has gone from being homeless to an affordable housing developer, with an eye on more projects to come in the Twin Cities. Dondo’s goal is to create more homes worthy of the strong women who seek help from Phumulani.

“For me, it took looking at my daughter and looking at the history of child abuse that I faced as a child and how my mother went through the same,” Dondo said. “One day I looked at her and said ‘not on my watch will this persist in my generation’.”