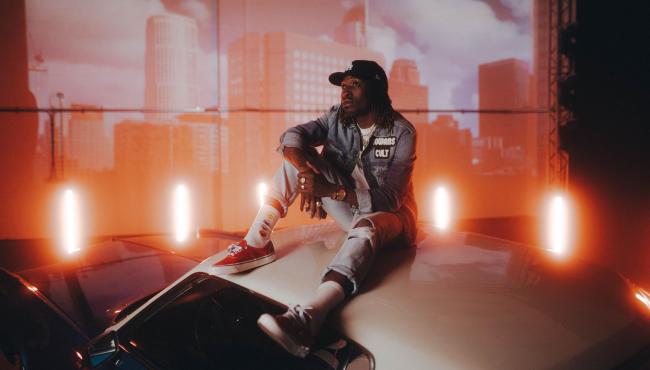 AN Edinburgh-based musician has just been billed as a potential star of the music scene.

Sean Focus is the only Scottish artist in the prestigious Ones to Watch list released by Amazon Music’s celebrated black music platform +44.

His music, rooted in afro-pop, hip-hop and dancehall, builds on his Zimbabwean heritage and experience of nearly nine years of living in the Scottish capital.

Like many others in the creative industry the lockdown was a huge blow for Focus as he was about to perform in Amsterdam and France as well as record an EP in London.

“It’s been really hard but throughout this year every time I felt like giving up something good happened,” said Focus, who lives in Edinburgh with his partner and three-year-old son.

The latest piece of positive news is his inclusion on the Ones To Watch list which means he will also receive support from the platform’s development fund as well as feature on a giant billboard on one of Edinburgh’s busiest thoroughfares.

The Leith Walk billboard was unveiled last week and has been welcomed with delight by Focus.

“To see my face on a billboard is one of the craziest moments in my career but it has helped me because people can see I am really trying to be part of this community,” he said.

Focus started producing music when he was at school in Zimbabwe aged just 14, then moved to Malawi at 17 to pursue a career as a sound engineer. Two years later he began performing and flew to Ireland to study music before moving to England.

He came to Scotland to visit his sister nine years ago and liked it so much he stayed, occasionally going back to London to record vocals for different artists.

“I like the people here and the reception I have been given,” he said. “There is a good energy and a good vibe and I’ve built up an authentic fan base with people that are willing to listen to me even not knowing my history or where I come from.”

Doors began to open when the BBC’s 1Xtra began playing his music which led to him being championed by other radio stations.

“It got to the point where I was the only Scottish artist with seven songs being played on radio in one year,” he said.

Support from the development fund will help to promote three new singles and on Friday his Aux Cord session went live on Amazon Music and YouTube. An exclusive freestyle performance of his single You In My Way is being released as a song on Amazon Music, Spotify, Apple Music and Deezer.

Outside the studio, Focus has become known for his energy on stage, from headline gigs in Glasgow’s SWG3 to the intimate Sneaky Pete’s in Edinburgh and supporting the likes of Young T & Bugsey, J Hus and more. He also heads up his own label, Imvaize, boasting releases from the best in underground talent in Scotland.

As soon as the pandemic restrictions are lifted, Focus aims to go on a tour of the country and also tour abroad.

He has no plans to change his stage name, however, which has so far served him well. Born Kondwani Mapemba he changed his first name to Sean after his friends teased him he had big lips like rap star Jay-Z whose real names is Shawn Carter. His second name was adopted by Mapemba because his father used to tell him he only focused on what he wanted and nothing else.

“What I wanted was a career in music so I just took Focus as my surname,” he said.