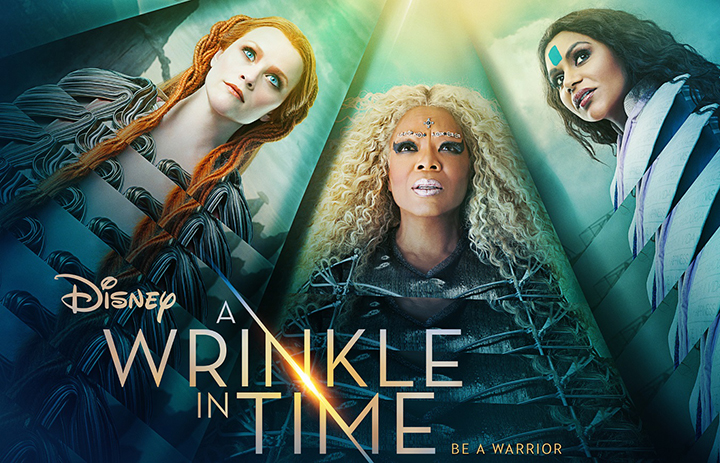 If “Black Panther” demonstrated that women can dominate a highly-lucrative action movie, then “A Wrinkle in Time” takes the lesson further — showing the boys how to be gracious followers.

The sci-fi fantasy is aiming to dislodge its Disney stablemate from atop the box office when it hits US theaters on March 9, with its young female protagonist leading two boys in the adventure.

“It’s nice for a young boy, young man even, to see that it is OK to have a sensitive side of you,” Zach Galifianakis, one of the movie’s few white male actors, told a news conference in Hollywood on Sunday.

“I come from a very masculine upbringing, a lot of people do, and I love the way I was raised. But looking back, we need balance.”

Striking that balance, Ava DuVernay’s movie is the first in history to entrust a budget of more than $100 million to a female African-American director.

Much of the movie’s messaging about gender comes in the shape of Calvin, Meg’s classmate and travel companion, a teenage boy perfectly at ease following, and instinctively trusting in, a young girl.

The character is played by Australian Levi Miller who, at the tender age of 15, called out the culture of “toxic masculinity” which he said was “rampant in society,” in one of the news conference’s more surreal moments.

Based on Madeleine L’Engle’s timeless 1962 classic of the same name, “Wrinkle” takes audiences across dimensions of time and space, examining the nature of darkness versus light and the redeeming power of love.

Through one girl’s transformative journey led by three planet-hopping guides, the movie posits that strength comes from embracing one’s individuality and that the best way to triumph over fear is to travel “by one’s own light.”

Fresh off heavy projects like the civil rights drama “Selma” and prisons expose “13th,” DuVernay directed from a screenplay by Jennifer Lee, one of the few women in Hollywood whose filmmaking achievements eclipse her own.

Lee, who won an Academy Award for “Frozen,” is the first female director of a Disney animated feature and the first woman to steer a feature to more than $1 billion at the box office.

“These films are my children, they have my name on them, my blood in them.”

DuVernay plucked 14-year-old Reid from thousands of hopefuls to play Meg Murry, the daughter of two world-renowned physicists who struggles with her self-image and just wants to fit in at her Los Angeles middle school.

Her preternaturally intelligent younger brother Charles Wallace (Deric McCabe) introduces Meg and Calvin to three magical beings — Mrs Which, Mrs Whatsit and Mrs Who — who have descended to Earth to help in the search for Mr Murry.

Traveling via a wrinkling of time and space known as “tessering,” they are transported to worlds beyond their imagination where they must confront a powerful evil force.

A rare original project in a Disney slate featuring mainly remakes and sequels over the next four years, “A Wrinkle in Time” stars Winfrey, Kaling and Reese Witherspoon as the celestial trio.

Kaling, who wrote, produced and starred in sit-com “The Mindy Project,” loved science fiction growing up, but said it was a genre “that largely did not love me back.”

“I never saw representation of a dark-skinned Indian woman, Indian girls, in anything I saw and it’s a pretty peculiar thing when you grow up loving something that doesn’t love you back,” she said.

“It’s such a pure love, because you’re not getting anything from it. To be part of this movie… is so fun because I finally feel welcomed with open arms in something that has ignored me completely.”

Winfrey is in many ways the woman of the hour, after a rousing Golden Globes speech against sexual misconduct led to a viral social media campaign calling on her to run for president in 2020.

The daytime TV queen, who has denied ambitions for office on several occasions, was asked if there was room for hope in an America reeling from recent mass shootings and polarized by politics.

“If everybody can get that message, that’s how we have hope in the world. We’re looking for warriors who can bring hope back.”