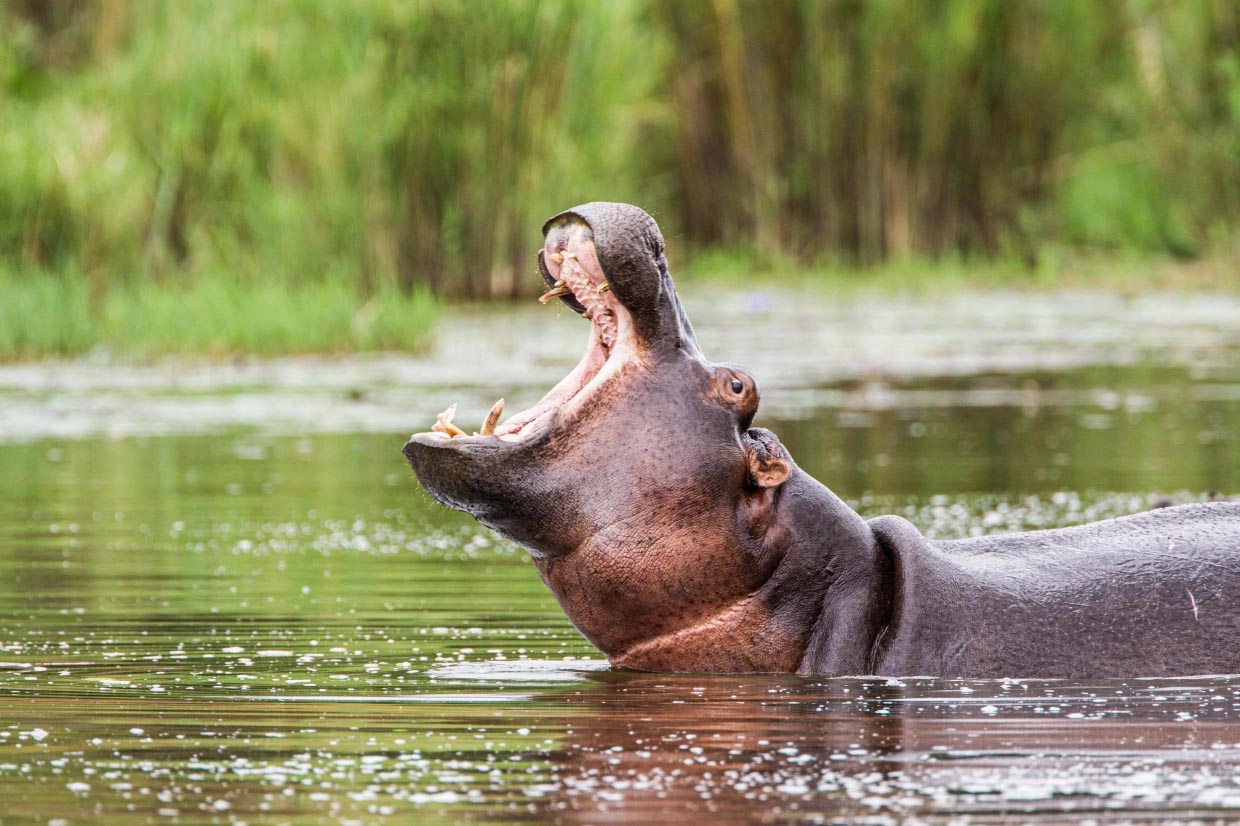 A SAFARI guide who was savagely attacked by a hippo has revealed how he survived being swallowed by the huge beast.

Paul Templer was leading a small safari tour of six people down the Zambezi river in his native  Zimbabwe  when the life changing encounter unfolded.

Boating near the country’s famous Victoria Falls in 1996, he jumped to attention when the animal knocked one of his pals out of his canoe.

“As I paddle towards him, the hippo was coming towards me under the water and the ripples on top looked like a submarine torpedo cutting through the water,” he told  7 News.

“So I turned towards him (his pal) and tried to grab him, and it was like something out of a movie because our fingers almost touched and then everything just went dark.

“It happened so quick, I had no idea what the hell was going on.

At this point, Paul realised that he was stuck in the beast’s throat – with no means of escape.

“He described the hippo’s putrid breath smelt of “rotting eggs” and his throat and mouth were “warm and slimy.”

However, quick thinking Paul knew he needed to agitate the animal so it would let him go and spit him out.

“So I managed to grab a hold of the tusks and push myself out, and burst to the surface.

However, after the hippo spat Paul out, he quickly swallowed the safari guide again – but this time feet first.

Despite being armed with a handgun – Paul was unable to reach for the weapon during the relentless attack.

He recalled seeing his dying friend in the water as he was swallowed for a second time.

“His eyes were like saucers. He tried to stay afloat but I think adrenalin literally overwhelmed him,” Paul said.

“It happened so quick, I had no idea what the hell was going on.

“So I turned and swam back for him, and just as I’m moving in to grab his hand, I’m hit from below.

“I’m up to my waist down the hippo’s throat. The hippo is just thrashing me around,” he said.

“This time my head, neck and shoulders are outside one side of his mouth, and from my waist down is outside the other,” he said.

“He just goes berserk. I remember at one point he threw me up into the air and I did a crazy sort of half twist.

“And when I fell back and he caught me in his mouth, but so hard that I thought he was gonna chop me in half,” Paul said.

“One of the clients said it was like watching a vicious dog trying to rip apart a ragdoll.”

Paul later recalled the moment he was then dragged to the bottom of the river – knowing he may not survive.

He said: “I remember just lying at the bottom of the river, looking up and I’m waist-deep inside the hippo’s mouth.”

“I can see green and blue and the sunlight on the water surface. And when I look around, I can see my blood mingling the water.”

Paul was eventually rescued by one of his friends, taken to shore and eventually received treatment at hospital.

Tragically, his friend who was knocked from his canoe by the beast drowned.

Looking back, Paul has described the experience as a “bad day at the office,” despite incurring life changing injuries.

Speaking to  The Sun in 2018 , he recalled how he suffered 39 “major” bites and was forced to have his left arm amputated by doctors.

But despite the incident, Paul has used the attack to inspire others as a motivational speaker living in the United States.

He has also survived cancer and is the proud father to three children.

This article was initially published by The Irish Sun.