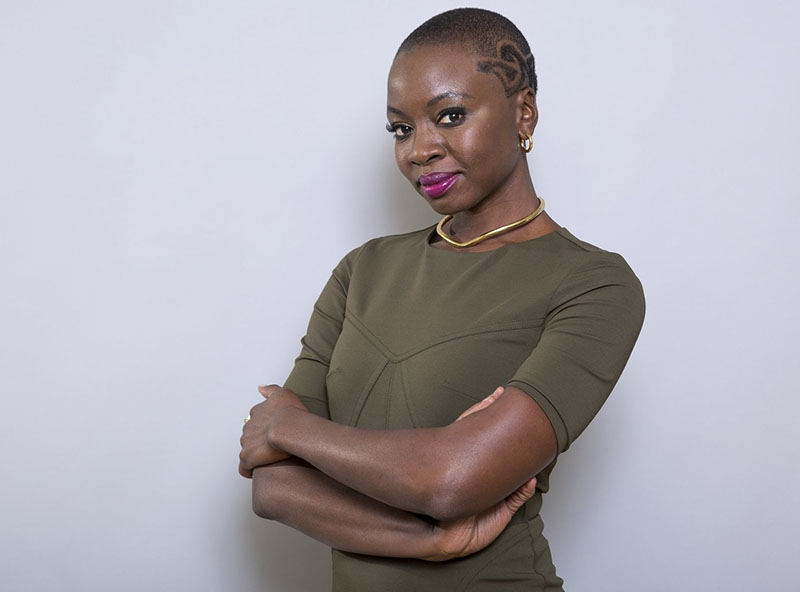 •This Article is taken from The Seattle Times

LONG before her breakout role as the sword-wielding Michonne in “The Walking Dead” or her powerful portrayal of Okoye, the fierce protector of Wakanda, in the blockbuster “Black Panther,” actor Danai Gurira’s work as a playwright was celebrated for bringing nuanced, complex stories to the stage that had not been told before.

Gurira’s award-winning plays have examined the experiences of black women with HIV in “In the Continuum,” and the struggle of Liberian women who were conscripted into sex slavery during war in “Eclipsed.” Her latest, “Familiar,” which runs at Seattle Repertory Theatre April 27-May 27, explores the complexities of life for a modern Zimbabwean-American family in the Midwest.

We caught up with Gurira, who was in New York City, by phone. Edited excerpts of the conversation follow.

How has it been for you since “Black Panther” came out?

It has been amazing how people have opened up and shared a great deal of how the movie affected them personally. It’s a humbling responsibility to edify and encourage people when they come forward with things that they have realized about themselves as they have watched the film or about their connection to their heritage.

It is definitely connected to the fact that I was born in the United States and I was raised in Zimbabwe and I couldn’t find a lot of narratives that really told stories around the experiences of people who were from the continent. But I was in this country that had recently come out of colonization; only in 1980 were black people allowed to vote in their own country. A lot of the education you’re receiving could be extremely specific to the Western paradigm. And then of course coming to the United States to university, that was only compounded. I became very, very, ravenous for depictions and storytelling that came specifically from the African perspective, because I couldn’t find many. It was really a necessity for me to start creating narrative around those stories. And actually I found it quite thrilling to do so. It was really an exciting experience to step into the vast variety of African stories that need to be told and try to take a stab at it and give them life.

I read that when you started writing from an African female perspective it felt pretty lonely for you. Has that changed at all since you started?

Yes, it has. There are thankfully a variety of African writers, female and male, emerging in various paradigms and very much in the playwriting realm and it’s a really exciting thing, because we have a lot of stories to tell. It allows also for various forms of collaboration, I think, in the future, which can result in some really, really, fantastic work.

“Familiar” has some autobiographical aspects to it. What was it like to write about your own family and community? Were there any tensions with yourself around what to share and what not to share?

Sure, sure. But largely the journey of “Familiar” was a very specific one, because it really became its own being. At first it was born of an impetus around being around members of my family at a wedding and just being around very interesting characters and culture clashes. But it was never directly based on people; it was kind of inspired by people. I had tons of material, not just for my own family, but from so many other immigrant families that I know and immigrant experiences that I know of across the United States. I always think a play tells you what it is and it’s your job to become an open and present enough vessel to hear it and obey it and submit to what it is.

How was the [Whidbey Island women’s writing retreat] Hedgebrook experience for you?
Hedgebrook is  more than an experience, it’s a place that I’m very passionate about, I’m very connected to and I deeply support. [As an alumna] it’s a part of me, it’s a part of my artistic process as much as it can be. [The mission is to give] women the space to create change through their abilities as writers and to be in an environment that nurtures them to do so both in solitude and in community. I think that Hedgebrook is a deeply special place I feel it should be replicated everywhere.

“Eclipsed” is now the first Broadway production to be written by, directed by and entirely cast with black women. How has that milestone felt for you?

To be specific, “Eclipsed” is the first play on Broadway to have ANY type of woman, not just black, write, direct and act in it exclusively. To be very clear, there’s never been a production of any color of woman that had that makeup. It’s a great thing, but it’s also a surprising thing, that we haven’t had that happen before, and that hadn’t happened before 2016. It’s something that we definitely need to see more and more of, and I think we will. That’s the hope and that’s actually what I truly believe. It’s great, but what I’ve always desired is to see more. Hear more voices, see more women and unheard voices get a platform. I hope that the fact that it happened and it did extremely well, I hope that it definitely continues to build a platform for more voices to be heard.