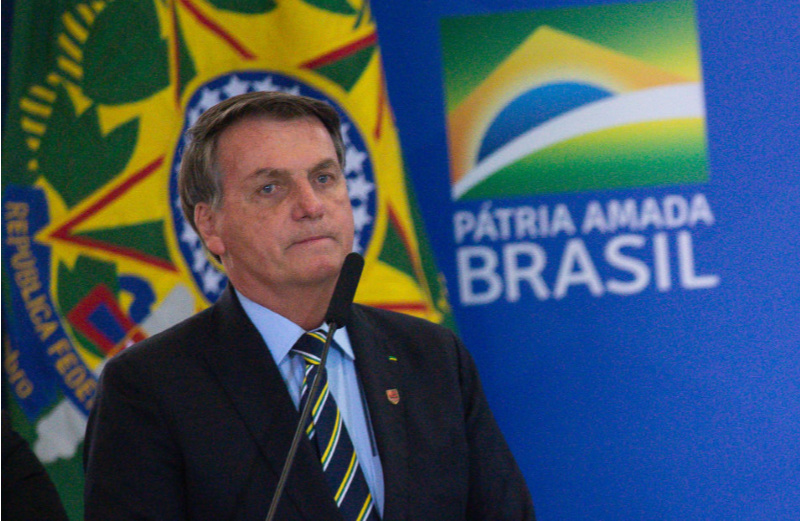 Brazil’s president Jair Bolsonaro today revealed he has tested positive for coronavirus – but dismissively removed his mask as he told reporters he felt ‘perfectly well’.

Bolsonaro, who has repeatedly played down the severity of the virus and mingled with crowds of supporters in spite of social distancing rules, said his fourth coronavirus test had come back positive but insisted he had only mild symptoms.

‘I’m well, normal. I even want to take a walk around here, but I can’t due to medical recommendations,’ said Bolsonaro, 65.

He also revealed he has been taking hydroxychloroquine, an anti-malarial drug championed by Donald Trump with unproven effectiveness against Covid-19.

The far-right president told supporters yesterday that he had been tested at a hospital and that an X-ray showed his lungs were ‘clean’.

Brazil has suffered one of the world’s worst outbreaks with more than 1.6million cases and 65,487 deaths, both figures second only to the United States.

Bolsonaro tested negative three times in March after meeting with US president Donald Trump in Florida.

Multiple members of his delegation to the United States were later reported to be infected with the virus, but neither Bolsonaro nor Trump tested positive.

On Monday, Bolsonaro told supporters in Brasilia that he underwent an X-ray of his lungs that showed they were clean, and that he would be tested for Covid-19.

‘I can’t get very close,’ he said in comments recorded by Foco do Brasil. ‘I came from the hospital. I underwent a lung scan. The lung’s clean.’

The president’s office said in a statement that the president is at his home and is ‘in good health.’ Today he told CNN Brasil that his fever had subsided despite his positive test result.