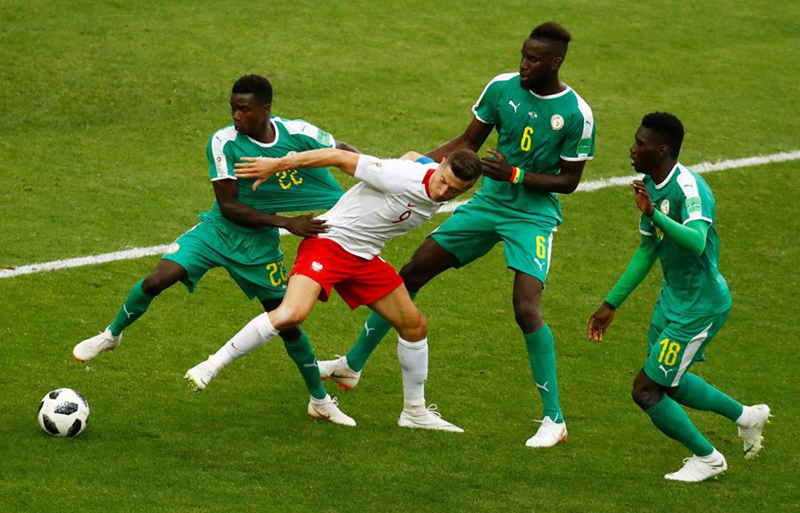 RUSSIA: Blaise has a beer in his hand, he’s in front of a TV screen showing the World Cup, and the smile on his face suggests life doesn’t get much better than this.

But Canal Plus may disagree — it owns the broadcasting rights in Gabon to the match being illegally shown in the bar in Libreville, the capital.

“I’ve got a Canal Plus box, but I got hooked up to BeIN Sports for the World Cup — it costs less!” says Blaise.

BeIN has no rights to broadcast World Cup matches in the western central African state.

But that is overlooked by a host of private firms, unconnected to the Qatar-based pay TV group, which will happily link up punters to the BeIN feed in exchange for a sum.

Blaise shrugs off any legal or moral qualms about broadcasting piracy, a common phenomenon across Africa. “It’s their problem, not mine.”

AFP contacted BeIN, but it did not respond.

BeIN’s direct competitor, Canal Plus, says piracy costs it between 15 and 20 percent of its turnover, according to Mamadou Mbengue, the head of the channel in Gabon.

“Canal Plus has a virtual monopoly on sports broadcasting rights in all of French-speaking sub-Saharan Africa, but some companies are committing industrial piracy. They get a free ride, while we paid for the rights,” he said.

“It worries us because it impacts our business. There is a risk of the same thing happening which occurred in the Maghreb — in the long term, we have to pack our bags.”

The station pulled out of the Maghreb region years ago, with BeIN now the only authorised World Cup broadcaster in Tunisia, Algeria, Morocco and Egypt.

Bizarrely, Canal Plus is back in Algeria — but illegally so. Viewers are able to quite easily buy set-top boxes, which break through the channel’s encryption.

The practice is widespread across the region, particularly in the Moroccan city of Casablanca known as “the Mecca of pirated material”.

In four of the five African countries that made it through to the tournament — Senegal, Nigeria, Morocco and Tunisia — public television channels have bought the rights to broadcast the national team’s matches.

In Senegal, the National Council of Audiovisual Regulation threatened penalties against any illegal transmission of games, coming after a row between two broadcasters over the rights that ended with both being able to show matches.

“The costs of broadcasting rights for sports events are often too high for our organisations, this partly explains the piracy,” said Gregoire Ndjaka, director of the African Broadcasting Union.

He has received between 10 and 15 calls a day since the start of the World Cup: “They come from Ghana, Cameroon, Ivory Coast… they all ask me to do something so that local actors respect the arrangements and stop hacking.”

Beatrice Damiba, president of the Pan-African NGO Convergence, which fights against piracy, said it works to inform people that it’s theft.

“It’s not only football that is hacked, there us also music, cinema, and that concerns all of Africa,” she said.