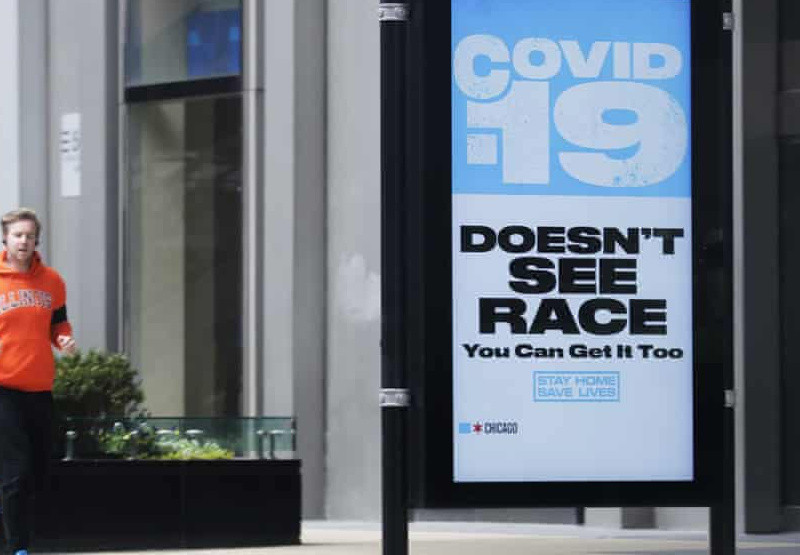 CORONAVIRUS has taken a heavy toll on Chicago, with nearly 65,000 confirmed infections in Cook county and about 3,000 deaths.

But the virus has hit black Chicagoans the hardest, shining a spotlight on racial inequalities that existed long before the pandemic.

Though black residents make up 30% of the city’s population, they account for 60% of its Covid-19 fatalities. They also have the highest rate of infection statewide, making up a quarter of Illinois’ total confirmed coronavirus cases despite representing just 15% of its population. And, according to a new study from the Chicago Urban League, systemic racism is at the root of the overrepresentation.

“Structural racism plays a great role in the crisis,” said Kathie Kane-Willis, director of policy and advocacy for the Chicago Urban League and the report’s lead author. “This whole crisis has laid bare how unequal and inequitable our society is.”

The racial divide in coronavirus has played out nationwide, with some recent data indicating black Americans are dying from Covid-19 at three times the rate of white Americans. But according to the study from the Chicago Urban League, those disparities have been even more pronounced in highly-segregated areas like Chicago.

Black Chicagoans, the study found, are both more likely than their white counterparts to be infected by the disease and more likely to die from it, thanks to a variety of factors including overrepresentation in service industries where social distancing is difficult or impossible; housing conditions in some predominantly black communities; and higher incarceration rates.

The city’s Covid-19 deaths, the study notes, have been concentrated in segregated, mostly black neighborhoods with high poverty rates. Racial discrimination in the healthcare system, environmental factors in predominantly black neighborhoods, and higher-than-average prevalence of preexisting conditions have also factored into the higher morbidity rates, according to the study.

Local leaders, including Lori Lightfoot, the city’s first African American mayor in three decades, have promised to address the disparities, both in the short term and at the structural level.

“This can’t just be temporary scaffolding,” Lightfoot said last month. “It’s got to be laying a foundation for a permanent fix to many of the problems that for too long we have ignored or said they are too big to solve.”

Chicago and Illinois have implemented some measures aimed at blunting the virus’ impact on the city’s black community, as well as its Latinx population , which has also seen a surge in confirmed infections and now represents a quarter of the city’s coronavirus deaths.

Lightfoot has partnered with community groups in establishing her Racial Equity Rapid Response Team aimed at addressing the crisis in black and brown communities, and Illinois governor J B Pritzker has ramped up testing in hard hit neighborhoods.

But black Chicagoans have expressed concern that the pandemic could exacerbate existing inequalities in America’s third-largest city, and are calling for systemic changes.

“Is Chicago ready to have a reckoning with the true realities it has created?” said Anton Seals Jr, whose group, South Shore Works, is part of the mayor’s rapid response initiative. “That’ll answer the question if it’s going to get worse or it’s going to get better.”

Seals praised the efforts to increase access to testing and other initiatives by the rapid response team, but said a larger push is needed, particularly among public officials and white citizens, to face up to the “nasty truth” of racism that resulted in the health and economic disparities in Chicago and the country as a whole in the first place.

“We’re gonna have to deal with this super-racialized society,” Seals said, describing the way the pandemic has played out in Chicago as a “tale of two cities”.

While some efforts have been made to address the disproportionate toll Covid-19 has taken on black Chicagoans, some here say more needs to be done.

A coalition of organizations and progressive lawmakers at the state and municipal levels have launched the Right To Recovery campaign, which is aimed at addressing the “gaping holes in our public health and social safety net infrastructure, as well as the brutal inequality built into our economy”.

Amika Tendaji, the Right to Recovery lead for the group Southside Together Organizing for Power, which has been working on housing issues related to the crisis, praised progressive measures to provide relief to communities hard hit by the pandemic, including legislation proposed by state representative Delia Ramirez to temporarily cancel rent and mortgage payments in Illinois. “We’ve worked really hard to put politicians in place that are responsive to their communities,” Tendaji said.

But Tendaji expressed concern that top officials aren’t taking bold enough action, calling the image of Lightfoot as a progressive mayor a “fallacy” and calling for structural change. “This is systemic racial injustice,” Tendaji said.