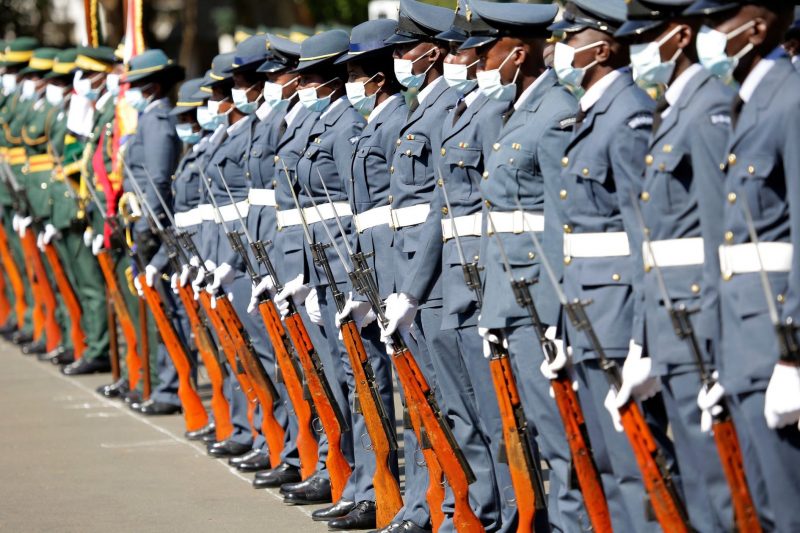 Members of Zimbabwe Defence Forces at the State House in Harare in August. The armed forces now have more vaccines than they need.
Spread This News

IN ZIMBABWE, where just 18% of the population are fully vaccinated against Covid-19, the armed forces have a surplus of shots thanks to a gift from a powerful benefactor: China’s People’s Liberation Army.

In the Philippines, another PLA donation has helped the majority of service members get vaccinated. In Ethiopia, where the Biden administration is levying fresh sanctions over alleged atrocities committed in an offensive against Tigray rebels, the PLA has delivered 300,000 Covid-19 vaccines to government troops.

The People’s Liberation Army has rapidly expanded vaccine donations to military forces this year across four continents. Chinese Defense Ministry figures show that as of September, it had made more than 30 deliveries to about two dozen countries.

Many of the recipients, like Zimbabwe and Ethiopia, are important players in Chinese leader Xi Jinping’s trillion-dollar Belt and Road infrastructure initiative.

A conservative tally by The Wall Street Journal, factoring in additional donations disclosed in confidential government documents and interviews with African military officials, suggests the donated doses in fact total more than a million. That number includes some shots made by China’s Sinovac Biotech Ltd., a private drugmaker.

The PLA’s shipments have come with additional military aid, including medical training and scholarships for senior officers to study in Chinese military colleges. In many cases, they also supplement shipments with donations of personal protective equipment, ventilators and other medical assistance.

“This is quite PLA- and China-unique,” because no other armed force has donated vaccines directly to other militaries on such a scale, says Helena Legarda, who studies Chinese defense policy at Mercator Institute for China Studies.

The PLA’s approach contrasts with the U.S. military, which has delivered hundreds of thousands of vaccines to American troops, but no shots directly to foreign allies’ militaries.

The U.S. Department of Defense has donated nearly $300 million worth of PPE, vaccine coolers, ventilators and other equipment for Covid-19 relief to civilian governments in 142 countries, according to spokesman Charlie Dietz. While some of the donations trickle down to foreign military personnel, the department restricts military-to-military interactions, Mr. Dietz said.

The growing public and private role of the PLA in China’s vaccine diplomacy shows how the country’s soft-power outreach is developing a harder edge in the intensifying contest with the U.S. for global influence.

Though military-to-military donations represent only a small portion of the roughly 1.4 billion doses China has sold and donated abroad, they are calibrated to help Beijing achieve strategic objectives it believes are necessary to compete with Washington, defense analysts and international-relations scholars say.

They help tighten ties with countries in Africa and Southeast Asia that are important sources of natural resources or regional influence, scholars say.

“In terms of soft power, there’s nothing better than healthcare and education,” said Ms. Legarda. “In many countries, militaries are powerful influential political actors so it’s never a bad thing to build ties with them,” she added.

The military donations also support Beijing’s desire to be seen as a responsible global power that’s helping fight the pandemic, distracting attention from its misstesps in handling the initial outbreak of Covid-19.

The Chinese Foreign Ministry referred questions to the country’s Defence Ministry, which didn’t respond to requests for comment.

The PLA’s coronavirus diplomacy drive began with a little-noticed announcement in March 2020 that said it delivered an unspecified amount of medical supplies, including testing kits, clothing and masks, to Iranian armed forces.

For the next year, as China’s government made headlines by delivering PPE across swaths of the developing world, the military’s role was little noticed.

But according to an International Institute for Strategic Studies analysis of publicly available data, the PLA was providing emergency military medical assistance or donations of protective gear and ventilators to 56 countries’ militaries and a U.N. peacekeeping mission by early 2021.

The army’s Covid-19 diplomacy shifted to vaccines in February. It began to send batches of vaccines abroad, starting with close allies Pakistan and Cambodia, then to other parts of Asia. The following month, shipments were dispatched to several militaries across Africa, starting with Sudan and Sierra Leone.

In May, it emerged that Sierra Leone had signed a $55 million deal with the Chinese government to develop 250 acres of beach and rainforest into an industrial fishing harbor. In August, the PLA expanded its vaccine reach to Latin America with a delivery to Bolivia, where Beijing has sought to deepen economic ties.

China’s government has previously said that it would make its vaccines an affordable public good and that it would give priority to Africa, where more than 10 nations’ militaries have gotten donations. Ren Guoqiang, deputy director of the Ministry of National Defense’s information office, said in March the PLA effort had “no political conditions attached,” and wasn’t in pursuit of any geopolitical goals.

In Sudan, the PLA delivered 250,000 doses in March to local military units operating along the oil-rich border with South Sudan, where China maintains a peace keeping force and is the largest buyer of the region’s crude. The Chinese Y-20 aircraft, which landed at 7 p.m. one evening in Khartoum, was greeted by a two-minute water cannon salute observed by Sudan’s deputy chief of staff and the military attaché from China’s embassy.

The day after Ethiopia received its first shipment in May, the country’s defense minister said the PLA was also financing 80% of a high-tech military hospital close to the capital, Addis Ababa, and offering scholarships to high-ranking commanders to train at the PLA Academy of Military Science in Beijing.

A PLA medical team conducted a nearly 500-day mission in Ethiopia, helping the army there establish a Covid-19 isolation and treatment center, according to China’s defense ministry.

Chinese authorities have showered publicity on several of the military donations. Shortly after one batch of vaccines arrived in Vietnam late August—just ahead of a historic visit to the Southeast Asian nation by U.S. Vice President Kamala Harris—Chinese diplomats joined the country’s state media in circulating pictures of China’s ambassador to Vietnam posing with Vietnam’s deputy minister of national defense in front of a Y-20 parked on the tarmac in Hanoi.

The PLA typically says its donations are at the request of the recipient military, though in at least one instance it appears that wasn’t the case. The Philippines, a U.S. ally that Beijing has tried to woo with increasing aid and investment, received 100,000 doses from the Chinese military in February—a delivery the Philippine defense ministry and armed forces both denied requesting.

“They just gave it to us,” Philippine Defense Secretary Delfin Lorenzana told the Journal of the shipment, which Philippines President Rodrigo Duterte received in person on the tarmac, along with 500,000 additional doses donated by the Chinese government. “I was informed when it was on the way to Manila.”