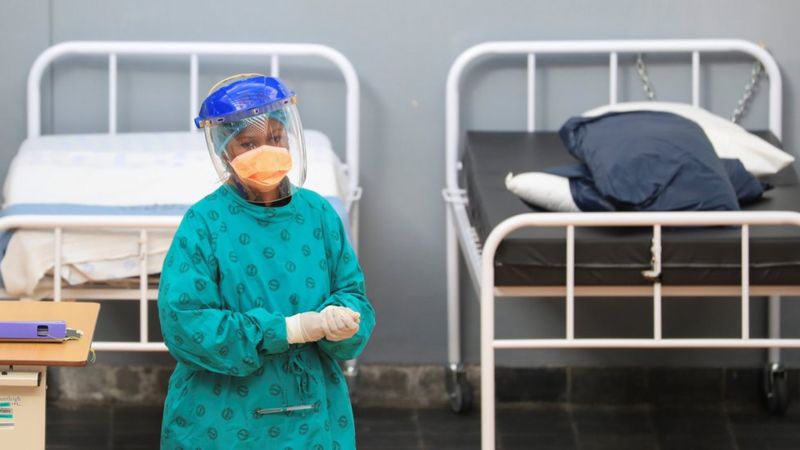 The World Health Organization (WHO) has said the Covid-19 outbreak in Africa may have passed its peak but warns governments not to be complacent as countries relax their restrictions.

The number of new daily confirmed cases overall has been dropping, although some countries are still seeing a rise in cases.

At what rate is coronavirus spreading?

Over the past four weeks, there has been an average 10% fall in the number of weekly new cases being reported, according to the Africa Centres for Disease Control (CDC).

But the CDC warns that Africa is not out of the woods yet.

“I don’t think we are over the first wave yet, we have not yet hit the bottom at all,” says the CDC’s John Nkengasong.

And there are still some countries seeing rising case numbers.

Morocco reported the highest number of new cases on the continent over the last seven days, more than South Africa and Ethiopia.

However, both Algeria and Egypt have seen a decline in confirmed cases over the past month.

Namibia and Mozambique in southern Africa are experiencing an increase in new cases. In East Africa, Ethiopia, Uganda and Rwanda have experienced an increase in cases recently, while numbers of new cases are dropping in Kenya.

In West Africa, there’ve been declines in new cases in Ghana, Nigeria, Senegal, the Gambia and Niger, but they’ve been going up in Burkina Faso, Mali, Sierra Leone and Ivory Coast.

The global humanitarian relief body, the International Rescue Committee, says it believes the true scale of the pandemic may be hidden because of a lack of testing and issues with data. WHO says changes in testing capacity and strategy can also affect numbers.

One example is Kenya where reported case numbers have been dropping for three weeks now, after the country has changed its testing strategy to focus on higher-risk groups only.

Others like Ethiopia have boosted testing with the country hitting one million tests early this month. There’s now been a steady increase in case numbers since mid-June, something the WHO says “is of grave concern.”

Which countries have been most affected?

South Africa has the highest recorded number of total cases and reported deaths in Africa, and the seventh highest number of cases in the world.

Daily reported numbers and hospital admissions have been falling, but the number of deaths is not falling at the same rate.

This could be explained by the time lag between a patient being infected, and then becoming ill enough to eventually die.

But a change in testing policy in South Africa could also have had an effect on the numbers of new cases.

“The country’s current policy of testing only those who present with symptoms makes full interpretation of case numbers difficult,” the WHO says.

And research from the South African Medical Research Council (SAMRC) indicates the number of people who have died from the virus could be much higher than reported.

It says excess deaths, which is the difference between deaths over a particular period and the historical average, rose by 17,000 – that’s a 59% increase compared with previous years.

Egypt has the second highest number of cases and deaths, but new infections in the country have also been dropping.

The reported death rate per capita has been low compared with other parts of the world, despite the poor health infrastructure in many African countries.

The WHO says this could be partly because of the relatively young population in Africa – more than 60% under the age of 25.

Covid-19 is known to have a higher mortality rate for older age groups, and health problems like obesity and type 2 diabetes are also less common in Africa.

In terms of what proportion of people who get Covid-19 go on to die, there were 11 African countries with rates comparable with or higher than the global average rate of 3.3% on 10 September.

How much testing is done in Africa?

There are wide variations in testing rates, with South Africa doing the most and Nigeria doing relatively few per capita, according to Our World in Data, a Uk-based project which collates Covid-19 information.

Nigeria had carried out just two tests per 1,000 people by 8 September, while Kenya had done nine by 7 September.

About half of the countries on the continent have a ratio lower than the benchmark of doing at least 10 tests for every positive case recommended by the Africa CDC.

And in some countries, there’s insufficient data available on testing.