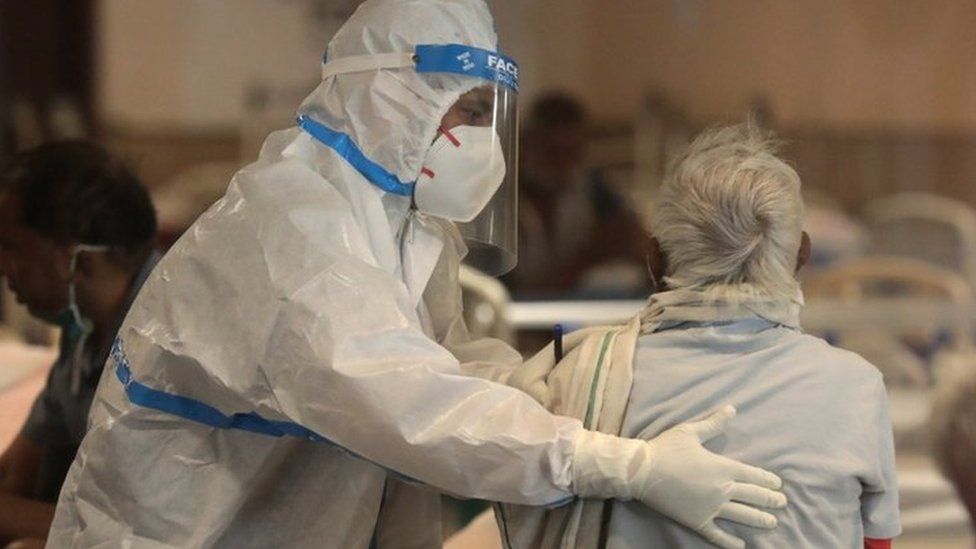 India has recorded its highest daily coronavirus death toll since the pandemic began – a day after it became the first country to register more than 400,000 new cases.

Its health ministry said 3,689 people had died within the past 24 hours.

Hospitals are battling to treat patients amid a chronic shortage of beds and medical oxygen.

Amid the crisis, vote counting started on Sunday for elections held in four states: Assam, West Bengal, Tamil Nadu, and Kerala – and the union territory of Puducherry.

The outcomes are being watched for signs of how the pandemic has affected support for Mr Modi and his Hindu nationalist party, the BJP. He has been criticised for allowing rallies to take place during polling in March and April.

Results so far from West Bengal, where Mr Modi had been seeking a win, instead suggest the TMC party of fierce Modi critic Mamata Banerjee will comfortably retain power.

India has recorded more than 19 million cases of coronavirus – second only to the US. It has also confirmed more than 215,000 deaths, though the real toll is thought to be far higher.

Experts have cited low testing rates and the number of people dying at home, especially in rural areas, as contributing factors to under-reported figures.

Brazil and the US have both registered daily tolls of more than 4,000 during the course of the pandemic.

In India, distressing images of families begging for hospital beds and life-saving supplies have been emerging for more than 10 days, while morgues and crematoriums remain overwhelmed.

Twelve people died on Saturday at Delhi’s Batra Hospital after it ran out of oxygen – for the second time in a week.

The Times of India newspaper reported 16 deaths in the southern state of Andhra Pradesh due to oxygen shortages in two hospitals, and six in the Delhi suburb of Gurgaon.

Delhi High Court has now declared it will start punishing officials if life-saving supplies don’t make it to hospitals.