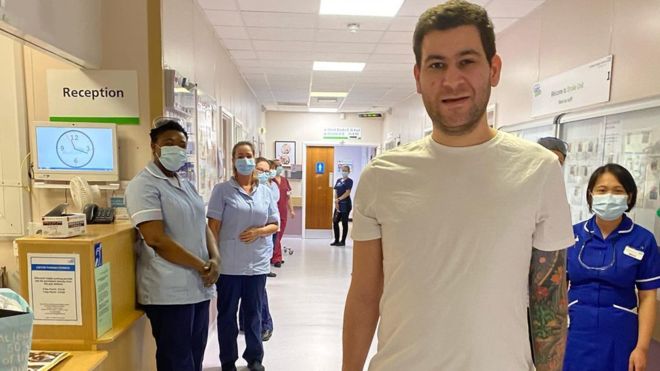 A father-of-two who survived coronavirus, pneumonia, sepsis, heart failure and a double stroke is to be the subject of a research study.

His wife Kaitlyn, who is training to be at a nurse at the hospital, was told to prepare for the worst.

But he was well enough to be discharged last Sunday, which his wife described as “truly a miracle”.

“We are so overwhelmed with joy that Omar is home. I never thought it would happen.

“Before he left the hospital, a research doctor asked for his consent to conduct a study of Omar’s case from start to finish so they can gain knowledge about what happened to him for future treatment protocols for other patients.

“It is incredible news and we are so proud he is helping other patients,” Mrs Taylor said.

Her husband, who is a regional director of Care UK, spent 20 days on a ventilator in intensive care before he was weaned off the sedation and transferred to a stroke unit.

He walked out of hospital last Sunday, much to his family’s surprise, and was greeted at home by neighbours who lined the streets of their village, Rowhedge near Colchester.

“I thought he would be in a wheelchair but I was amazed when he walked round the corner. It was the best feeling I have ever felt in my life,” Mrs Taylor said.

She said her husband has settled in very well at home, where he is having daily physiotherapy and speech therapy.

“He still can’t speak and it’s hard for us to understand each other but it’s just going to take time,” she said.

Mrs Taylor said her colleagues had taken “exceptional care” of her husband and thanked her friends who have setup a fundraising page to support the family, which has raised over £17,000.