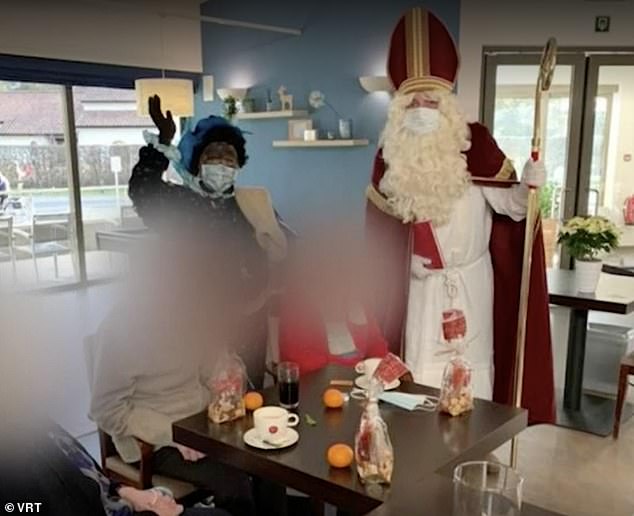 The volunteer dressed as Sinterklaas was welcomed in to spread Christmas cheer among the 150 residents of the Hemelrijck care home in Mol, Antwerp
Spread This News

Some 18 care home residents have now died from coronavirus after an infected Santa Claus came to visit in Belgium.

Sinterklaas and his helpers in black face known as Zwarte Piet (‘Black Pete’) infected 121 residents and 36 staff at the Hemelrijck care home in Mol, Antwerp, earlier this month.

Pictures of the man dressed as St Nicholas emerged to two weeks ago and the ‘superspreader’ has been blamed for the home’s rising death toll since.

Five more elderly residents died over Christmas Eve and Christmas Day and at least one was treated with oxygen.

The Father Christmas fell ill and tested positive for Covid-19 three days after visiting, prompting health officials to start testing at the home.

Mayor of Mol Wim Caeyers told local media: ‘We’re expecting up to ten difficult days. It has been a very black day for the care home.

‘It is a very great mental strain to bear for the man that played St Nicholas, as well as for the organisers and the staff.’

But pictures of the event showed that not all residents wore masks and that Santa and his little helpers stood within two metres of the elderly.

Mr Caeyers said: ‘Initially [the care home] said that the rules had been followed, but then straight away you receive photos from the families of residents where you can see that this wasn’t the case.’

His administration has called the care home ‘a totally irresponsible organization.’

The mayor said that it will be ‘all hands on deck’ to bring the virus under control, with local health workers, the Red Cross and the Governor of Antwerp helping, following crisis talks on Sunday.

A spokesman for Armonea, the firm which manages the home, said: ‘The team is very shocked by what happened, but that also makes them very motivated to get the virus out again.’

One of Belgium’s top virologists, however, has expressed his doubts that the Santa Claus volunteer could have caused so many infections.

Marc Van Ranst, of KU Leuven university, said: ‘Even for a super-spreader, these are too many infections at once.’

He believes that poor ventilation is much more likely the cause and that CO2 measurements should be taken by the local health officials.

Nonetheless, he added that having Santa visit during the pandemic was a ‘stupid idea.’

Belgium has the worst coronavirus deaths per million of its population in the world.

The country recorded 2,342 new coronavirus cases on Christmas day, with 51 dying from the disease.