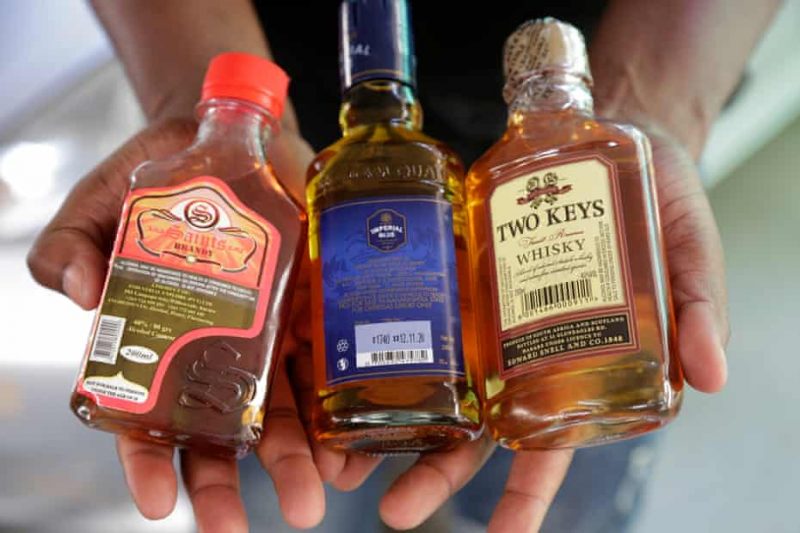 This illicit industry existed before the Covid-19 crisis of course, and it is still going on now that bars have reopened.

Their home-made moonshine, produced in makeshift stills, is poured into empty bottles of name-brand alcohol and sold in market stalls and along roadsides.

Among the new alcohol entrepreneurs, who joined the trade recently is 26-year-old Forward Nyakuenda of Mbare township near Harare. He sells 200-milliliter bottles of illicit liquor for 0.50 US cents each.

At his market stall, Nyakuenda places bottles of home-made spirits in neat rows. The bottles bear brand-name labels such as Café-Rum, Challenger, King Stallion and Two Keys. Customers know that he is not selling the brand-name products, but do not seem to care.

His trade is clearly illegal, but police raids are of no concern.

The trade has a long history – and is common in many poor countries where consumer demand is strong, but purchasing power is weak. The home-made alcohol sold by Nyakuenda and many others is known in Zimbabwe as musombodia, kachasu or tumbwa. It is a blend of alcohol and brown food colouring.

There are occasional cases of poisoning due to excessive ethanol content, with people going blind or even dying.

Hilton Nyamukapa of the Zimbabwe Civil Liberties and Drug Network is in favour of legalising moonshine industry.

“Illegal alcohol is cheap and accessible”, he says, and in particular young unemployed people buy it. Demand cannot be met through legal channels so far.

The general experience internationally is that an illegal industry is impossible to regulate, so there can be no quality control preventing poisonings, for example.

By mid-November, about 20% of Zimbabweans were vaccinated, according to the news agency Reuters, and bars were open again to patrons with vaccination certificates, but of course, the illicit liquor trade is still going strong – and it will not go away.

One of the customers, 24-year-old Teddy Gwangwava, says she drinks illicit alcohol to drown her sorrows, which include joblessness.

Gwangwava also supplies illicit alcohol to others. She buys home-made alcohol in neighboring South Africa and smuggles it into Zimbabwe with the help of long-haul truck drivers.

During lockdown, owners of legitimate bars had to close. Some switched to the illicit trade, for lack of alternatives.

Mike Mhike of Warren Park, a neighbourhood west of Harare, is among those who made the switch, employing runners to sell moonshine booze at street stalls in the capital city.

He says that “people love to get drunk because many of them are stressed”.

Lockdown restriction thrust many people deeper into poverty. The times are still tough now, even in the eyes of Zimbabweans, who have experienced many serious crises in the past decades.