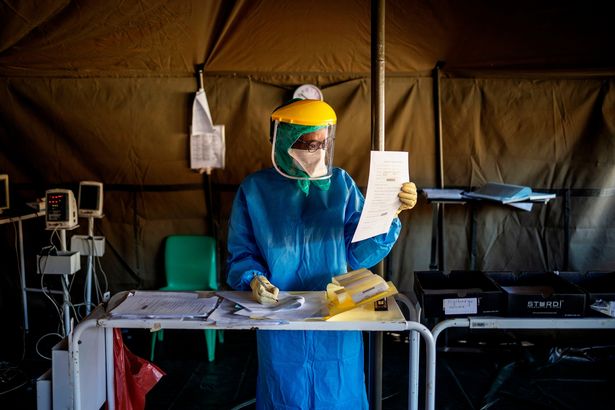 A NEW Covid-19 variant with an “extremely high number” of mutations is believed to be the most evolved strain of the virus and could escape existing vaccines, scientists have warned.

The B.1.1.529 variant, an offshoot of an older variant called B.1.1, has 32 spike mutations in the spike protein and has been found in Botswana – where it is believed to have first emerged – as well as South Africa and Hong Kong.

Only 10 cases of the new variant have so far been spotted through genomic sequencing, but experts believe its identification in three countries suggests it could be more widespread.

The single case identified in Hong Kong came from a person who had recently travelled from South Africa, sparking fears that more infections could have spread through international travel.

The high number of mutations in the new variant has caused concern among the scientific community, because a number of the mutations may help the virus evade immunity.

Dr Tom Peacock, a virologist at Imperial College who tweeted about the find, described the variant’s combination of mutations as “horrific”.

Describing the new strain’s mutation profile as “really awful”, he added that it had the potential to be “worse than nearly anything else about”, including the now-dominant Delta strain, which has 16 spike mutations.

He wrote: “Export to Asia implies, this might be more widespread than sequences alone would imply. Also, the extremely long branch length and incredibly high amount of spike mutations suggest this could be of real concern (predicted escape from most known monoclonal antibodies).

“Worth emphasising this is at super low numbers right now in a region of Africa that is fairly well sampled, however, it very very much should be monitored due to that horrific spike profile (would take a guess that this would be worse antigenically than nearly anything else about).”

The Hong Kong case was a 36-year-old man who travelled to South Africa on 23 October and returned on 11 November.

He tested negative on his return to Hong Kong but went on to test positive on 13 November while undergoing quarantine at a hotel.

In South Africa, cases rose from 312 on Monday to more than 860 on Tuesday, but scientists believe it is too soon to tell whether there is a link with the new “super variant”.

New coronavirus variants are identified all the time and often will not spread beyond a handful of cases.

There are currently no cases of the B.1.1.529 variant in the UK, but officials and scientists at the UK Health Security Agency (UKHSA) said they were monitoring and investigating the variant.

Dr Meera Chand, Covid-19 Incident Director at UKHSA, said: “The UK Health Security Agency, in partnership with scientific bodies across the globe, is constantly monitoring the status of SARS-CoV-2 variants as they emerge and develop worldwide.

“As it is in the nature of viruses to mutate often and at random, it is not unusual for small numbers of cases to arise featuring new sets of mutations. Any variants showing evidence of spread are rapidly assessed.”

Professor Francois Balloux, director of the University College London’s Genetics Institute, said the variant may have evolved during a chronic infection in an immunocompromised person, possibly an untreated HIV/Aids patient.

He said: “I would definitely expect it to be poorly recognised by neutralising antibodies relative to Alpha or Delta.

“It is difficult to predict how transmissible it may be at this stage. For the time being, it should be closely monitored and analysed, but there is no reason to get overly concerned, unless it starts going up in frequency in the near future.”