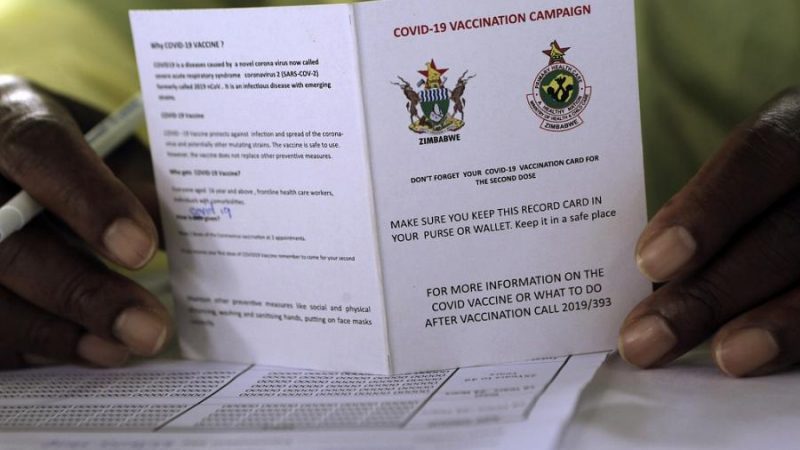 RAMPANT vaccination cards thefts at health facilities for sale to people not vaccinated hampering the collation of accurate Covid-19 data and information.

This is resulting in the country chasing a mirage target herd immunity against the pandemic, the latest Zimbabwe Democracy Institute (ZDI) report says.

In its September 2021 access to public health survey report, the think-tank attributes the thefts to poor salaries of health personnel trying to eke out a living through dishonest means.

“Theft of Covid-19 vaccination cards at vaccination centres as reported in mainstream media is an indicator of a bad state of affairs in the health sector in as far as remuneration of healthcare workers are concerned,” it said.

“These unfortunate incidences distort the country’s Covid-19 vaccination data and information, and give a wrong impression on vaccination progress,” noted the report.

It further reads, “The government’s failure to address incapacitation of healthcare workers in Zimbabwe is proving to be catalyst of corrupt activities across many health centres in Zimbabwe.”

Following a mandatory requirement by most companies, and the Public Service  Commission, to produce proof of vaccination, some workers opposed to jabbing resort to buying cards to avoid losing their jobs.

Also, as announced by Information minister Monica Mutsvangwa following Tuesday’s Cabinet meeting, entertainment joints, bars and restaurants, will open only to fully vaccinated patrons who should show proof of vaccination.

ZDI says it recently noted people were scrambling for cards without necessarily going through the normal and accepted vaccination processes.

“An enquiry carried out by ZDI reveals that details of people buying Covid-19 vaccination cards are entered into the official vaccination database.

“It, therefore, suffices to say the reported number of people vaccinated by 30 September 2021, consists of a figure of people who bought the vaccination cards and have their details entered into the official database,” added the ZDI report.

“There is a risk of chasing a dummy Covid-19 herd immunity if the rot in the public health sector is not urgently addressed.”

The local authority made the discovery of the missing vaccination cards (serial numbers 02544941 to 02544967) on September 27, and the Criminal Investigations Department (CID) has since been summoned to probe the suspected internal job at the clinic, where acts of corruption are reportedly rife among staffers.

By the time of writing, no recoveries nor arrests had been made.

According to an investigation by NewZimbabwe.com, vaccination cards are stolen for resale at US$20 each to persons who don’t want to be vaccinated.

Observers have noted such acts of theft and corruption in the health sector are militating efforts in combating the killer respiratory ailment, which has claimed thousands of lives across the country, and millions globally.