When Danai Gurira was 12, growing up in Harare, Zimbabwe, she auditioned before her seventh-​grade class for the lead role in a play titled My Uncle Grey Bhonzo. She recited her lines and then, before taking his turn and without explanation, the boy she was up against forfeited. The experience, if not the substance of the play itself, has stayed with her:

“All I remember about the play was wearing my father’s suit,” says Gurira, 44. We’re speaking one morning in early March, and she’s sitting in her sun-​splashed New York apartment—so bright I had assumed she was in L.A. from my Zoom-​distanced vantage—an extensive library behind her. “My father was not a big man, so somehow I guess I fit into it.”

I had asked Gurira whether she had ever professionally performed a male role, given her upcoming engagement as Richard III for the Public Theater’s Shakespeare in the Park.

She has accumulated a formidable theatrical résumé, as well as many seasons on The Walking Dead, where she played the zombie-​slaying warrior Michonne, and a starring part in Black Panther and the forthcoming sequel, Black Panther: Wakanda Forever. (She’s just back from filming Wakanda in Atlanta, in fact, though the only details I can extract from her about that highly anticipated November release relate to her love of the city.) Her answer to the male-role question is no—though this is not necessarily something she laments.

“If ever there was a time for me to take on a dude like this, it’s probably now,” she says. (We are speaking as the tragic invasion of Ukraine unfolds, and Vladimir Putin’s brutality hangs over our conversation.) Her understanding of men like Richard—who Shakespeare committed to our historical memory as a twisted, hunchbacked villain and possibly the most evil monarch of all time—has become much stronger and more nuanced.

“As you get older, you realize more and more about what toxic masculinity is, and there’s something about getting into it from a female perspective, from my perspective. We’re looking at horrible tyrannical behavior right now. I want to dig into: What is that?”

Gurira sees a transformation in her own understanding and approach, but for many who have known her—perhaps even an astute seventh-​grade classmate—her talent and dedication have been there all along.

The youngest of four children, Gurira was born in Grinnell, Iowa, to academic parents (her father is a just-​retired chemist, her mother a librarian), and was raised there until her parents moved to Zimbabwe, where they were originally from, when she was five.

“It was a very intimate decision for my parents, particularly for my mother, who had gone back a few years earlier and had seen how her parents were aging. She wanted us to know them before it was too late,” she says. “And Zimbabwe had just become a new nation. There was this burst of new life, a celebration of the country.”

Although Zimbabwe was in many ways severing itself from its colonial past, Gurira was educated at an all-girls school that followed the British system. “The Brits—they love to fill you up with their culture,” she says.

“Thankfully I liked Shakespeare.” She was athletic—​swimming, track, tennis (“wasn’t any good”), and field hockey (“actually pretty good”)—and a sense of the mind-body connection has stayed with her even now: “I have almost too much understanding of how to keep myself healthy.”

She still swims and runs, and works with a trainer (the person she blames for her surfeit of knowledge)—the athleticism of The Walking Dead was one of its chief attractions. “I definitely got that wish answered,” she says.

In high school, Gurira played Laertes in a production of Hamlet, and studied for her A Levels in English. When it came to college, though, there was no doubt that she would return to the U.S., as her siblings had done before her, for the more open-​ended exploration that American higher education offers. She majored in psychology at Macalester College in St. Paul, Minnesota, and has described that period—​improvising recipes in the dining hall, hanging out with her then boyfriend in her luxuriously large single room, summoning outrage over political injustice—as “the time of my life.”

One quickly gets the sense in speaking with Gurira that she is a performer who thinks and engages deeply with the world. A playwright and screenwriter as well as an actor, she has a passion for elevating Black and African voices, and even—in what seems like her nonexistent free time—is the executive artistic director of Almasi Collaborative Arts, an organization that stages readings, conferences, and other events to promote the dramatic arts in Zimbabwe. 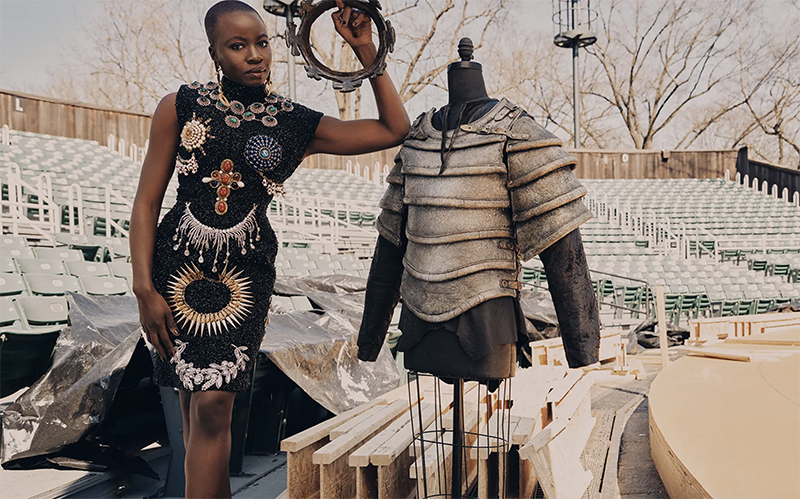 Her current reading includes Maaza Mengiste’s The Shadow King, Yaa Gyasi’s Transcendent Kingdom, Cicely Tyson’s memoir Just as I Am, and Dambisa Moyo’s Dead Aid, an examination of where economic-​development funds go wrong—that last book is research for one of her long-​simmering writing projects she won’t discuss for fear of jeopardizing the precarious development process for TV and film. (Gurira was adapting Chimamanda Ngozi Adichie’s Americanah for the screen, with Lupita Nyong’o set to star, until the project was scuttled by the pandemic.)

“If I was thinking about theater rather than film and television for all these years, I’d probably have written three new plays by now,” she admits.

Richard III is a “villain you want to watch,” says director Robert O’Hara, “and Danai has that in her: She’s incredibly charismatic but incredibly bold”

It was as a double-threat playwright and actor that Gurira first gained a foothold in the performing arts. Her debut play, which she performed in and cowrote, In the Continuum, began as a grad school project at New York University that she cocreated with her classmate Nikkole Salter. From there she would write several more, including the Tony-winning Eclipsed, starring Nyong’o—the first work on Broadway to have an entirely Black and female cast, director, and playwright.

“The fact that she’s a hybrid, a writer-​actor,” says Richard’s director, Robert O’Hara, himself a writer-​director, “is very exciting.” O’Hara first met Gurira when she was still at NYU and was immediately taken with her. “I knew from the very beginning she was special,” he says.

The Public Theater’s artistic director, Oskar Eustis, also encountered Gurira through NYU, and was similarly affected: “The world has now seen it on film,” he says. More recently, he’s put her on the Public’s board. “She’s technically my boss. I thought that was the best way of keeping her close.”

O’Hara’s process in thinking through Richard III was simple: “It was, How can I work with Danai? I always wanted to get her back to the stage.” The last time Gurira performed in a play, in fact, was in 2011, when she was cast as the virtuous, innocent Isabella in Shakespeare in the Park’s Measure for Measure—“the polar opposite” to Richard, she says.

Richard is a king with a bad reputation and irresistible allure, the protagonist and antagonist at the same time. He’s a “villain you want to watch,” says O’Hara, “and Danai has that in her: She’s incredibly charismatic but incredibly bold. She has a very strong energy that can captivate an audience.”

It is early days—far from the start of rehearsals in May—when we speak, but O’Hara already has some idea of where he’d like to push his production. For starters, he will situate it in the late 15th century, the period when the play actually takes place.

“Usually it’s performed in Elizabethan costumes,” he points out. “You never really see it set in its own time period.” Despite the temporal specificity, he will invoke contemporary themes, as well: “What speaks to me is what we as a society let men get away with when the rest of the world is saying, ‘We don’t want to upset him anymore.’ What happens when we genuflect to power?”

For all its ambient merriment—there is nothing like an evening of theater in the open-air Delacorte, with the galvanizing threat of summer showers or a stray raccoon wandering across the stage—​Shakespeare in the Park has a bit of a reputation for stoking political controversy.

Think back no farther than the 2017 production of Julius Caesar, in which the title character was depicted with an undeniable resemblance to Donald Trump, an artistic decision that earned the production the unlikely honor of becoming a Fox News talking point and prompted one protester to storm the stage shouting

“Stop the normalization of political violence against the Right!” This time, Eustis, who directed that production of Julius Caesar, self-​deprecatingly assures me the play will be much more subtle. “Robert is a visceral director,” Eustis says. “He’s incredibly smart, but he also creates an emotionally powerful expression.”

Whatever geo​political overtones might hang over this production, there’s no doubt that this Richard III will be, in large part, a showcase for its star. “Danai is one of the greatest we have,” says Eustis, “and a great playwright as well—it’s almost unfair.”

Gurira herself seems to have a sense that she’s about to undertake a daunting endeavor—and the confidence that she can make it her own. She’s been busy revisiting some of the classic portrayals of Richard, she says, but not letting them overwhelm her. “I’m a very specific person taking on this guy. I have to rely on all that’s inside of me. You want to acknowledge the greats, but it has to be singular. It has to be your own thing.”