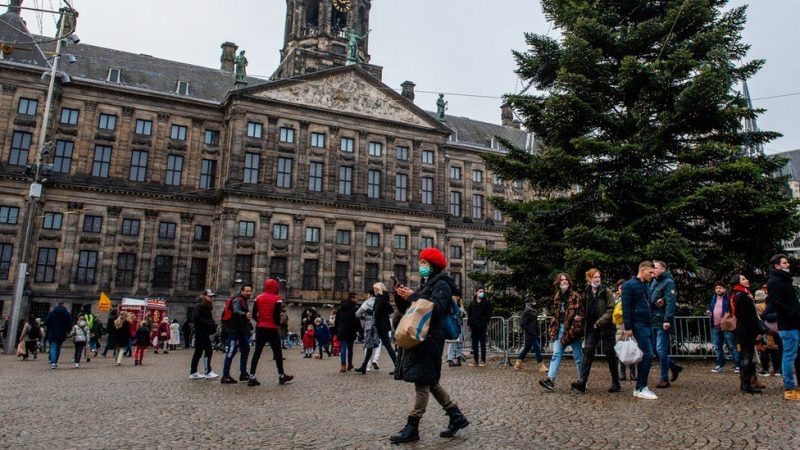 THE Netherlands has begun a strict lockdown over Christmas amid concerns over the Omicron coronavirus variant.

Non-essential shops, bars, gyms, hairdressers, and other public venues are closed until at least 14 January. Two guests per household will be allowed – four over the holidays.

Countries across Europe have been tightening restrictions as the heavily mutated variant spreads.

The new rules in the Netherlands are the strictest to have been announced over Omicron so far.

“I stand here tonight in a sombre mood. And a lot of people watching will feel that way too,” Mr Rutte told a news conference on Saturday.

“To sum it up in one sentence, the Netherlands will go back into lockdown from tomorrow.”

Under the new restrictions, people are being urged to stay at home as much as possible.

There are strict limits on the number of people who can meet. A maximum of two guests, aged 13 and over, are allowed in people’s homes.

This will rise to four people between 24 and 26 December, and on New Year’s Eve and New Year’s Day.

Events are not permitted other than funerals, weekly markets selling groceries, and professional sports matches with no spectators.

Restaurants can continue to sell takeaway meals, and non-essential shops can offer click and collect services.

Meanwhile, all schools are now closed until at least 9 January.

“I can now hear the whole of the Netherlands sighing. This is exactly one week before Christmas, another Christmas that is completely different from what we would like,” Mr Rutte said.

But, he added, a failure to act now would likely lead to “an unmanageable situation in hospitals”.

Earlier on Saturday, people rushed to do their Christmas shopping amid reports that new measures were about to be introduced.

“It’s too busy, but I’m coming before the Christmas holidays to pick up gifts, it seems like a new lockdown is coming,” Ayman Massori told AFP news agency.

For weeks, curfews have been placed on hospitality and cultural venues in the Netherlands in an effort to limit the spread of Omicron.

The Dutch National Institute for Public Health has reported more than 2.9m coronavirus cases since the pandemic began, and over 20,000 deaths.

It says the Omicron variant currently still accounts for a minority of coronavirus cases in the Netherlands, but is spreading rapidly.

Officials say it is expected to become the dominant variant by the New Year.

The head of the Dutch outbreak management team, Jaap van Dissel, said the new measures would “buy time”, allowing more people to get booster shots and for the healthcare system to prepare for a possible rise in infections.

“As a country, we are best protected if as many people as possible get a booster vaccination,” he said.

More than 85% of all adults in the Netherlands have been vaccinated, but so far fewer than 9% have had the booster shot.

Health Minister Hugo de Jonge said all adults would now get an invitation for a booster appointment by 7 January.

Several other European countries have also announced measures designed to curb the infections.

France has imposed strict travel restrictions on those entering from the United Kingdom – the hardest-hit country in the region, with nearly 25,000 confirmed Omicron cases on Saturday.

From 23:00 GMT on Sunday, Germany will also ban British tourists and business travellers from entering the country.

Europe has already seen more than 89 million cases and 1.5 million Covid-related deaths, according to the latest EU figures.