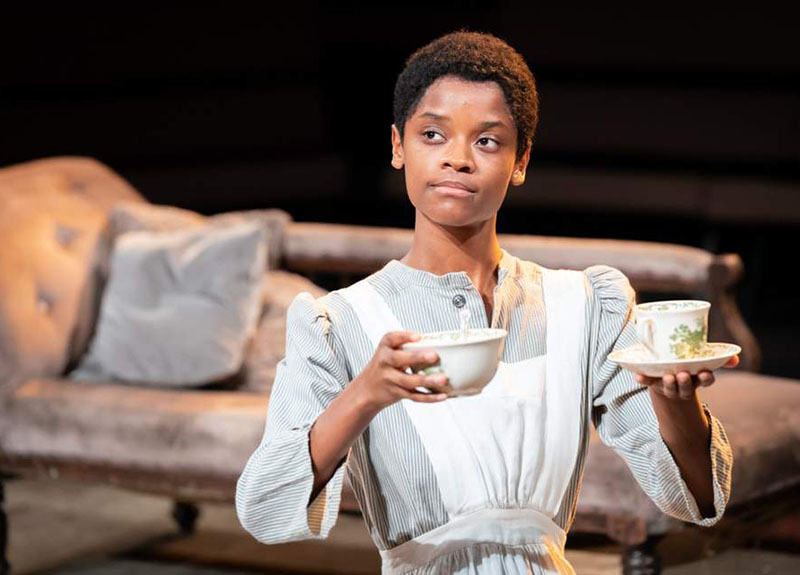 Written by Danai Gurira and starring Letitia Wright – both Black Panther alumni – The Convert shines like a glittering bauble in Kwame Kwei-Armah’s first season at the Young Vic. But this production is about much more than flashy casting: while the play isn’t new, having been first seen in the US in 2012 and staged only last year at the Gate in London, it has the feeling of a modern classic. And under Ola Ince’s direction, this is a fiercely realised staging of it.

We’re in southern Africa – what is now Zimbabwe – under British colonial rule, in 1896. A black man, Chilford, is a Christian missionary, desperate to bring his fellow Africans to Jesus. He doesn’t have much success, until he intervenes in the fate of Jekesai (Wright), a young girl about to be married off to an old man with many wives. Instead, he employs her to clean his house, sends her to school, and teaches her to be a good Christian.

So thankful for what she sees as this divine intervention in her life, Jekesai – who Chilford renames Ester – becomes a true believer. But while she appears to enthusiastically switch from animism to Roman Catholicism, the cost of that path slowly becomes apparent, as Jekesai is expected to renounce her language, her name, her cultural rituals, and eventually even her family.

What’s wonderful about Gurira’s writing is its willingness to richly inhabit all positions. While there’s certainly arch humour in the way the well-to-do black men and women mimic the manners of Victorian England – as well as a dull ache at that internalised racism, the word “savages” dropping so casually from their mouths – there is no sneering at their faith.

Jekesai becomes truly devout, devoted. She tries to live by Jesus’s teachings. As the play builds to a brutal ending, following an uprising of the indigenous population against the British, there is a horrible moment where she realises that the people who gave her this beautiful religion in no way follow its tenets of love and mercy.

This is, in many ways, an old-fashioned play, with a meaty central character arc and a three-hour, three-act structure that moves from lightly comic set up to tragedy. If I didn’t quite buy all of the twists in the final section, I was still gripped by the darkening drama.

Wright charts the changes in Jekesai brilliantly, moving from the loose-limbed village girl, all emphatic expressive gestures and outbursts, to being upright and righteous, as if her religious zeal were an iron rod down her back. She absolutely holds the room, but the whole cast is strong.

Pamela Nomvete as Chilford’s maid has a real air of contempt, somehow physically embodying resistance to cultural colonisation. Luyanda Unati Lewis-Nyawo as Prudence, a highly educated African woman who sounds like an English toff but encourages Jekesai not to lose her roots, is fascinating. It’s not always an easy part, but Lewis-Nyawo plays all the contradictions, and offsets Prudence’s rather saintly goodness with a wilful, fiery-eyed force.

Paapa Essiedu, one of those performers that transforms themselves for every part, is remarkable as the bowler-hatted Chilford: here his prissy, priggish mannerisms – bouncing on the balls of his feet, primly clasping his hands or making little fluttering motions with his fingertips – speak volumes about his desperate desire to be “civilised”. He’s very funny, too, staying on just the right side of caricature.

Naomi Dawson’s set is simple but effective: the action all takes place within a room in Chilford’s home, evoked in cool white lights while the surrounding cracked red earth is bathed in a warmer gold. See-through gauze walls ascend and descend throughout the play, visually suggesting that these characters are contained in an impossible situation: they’ve rejected their own culture but will never be accepted by white Christians. Caught between two identities, two communities, they are effectively trapped.