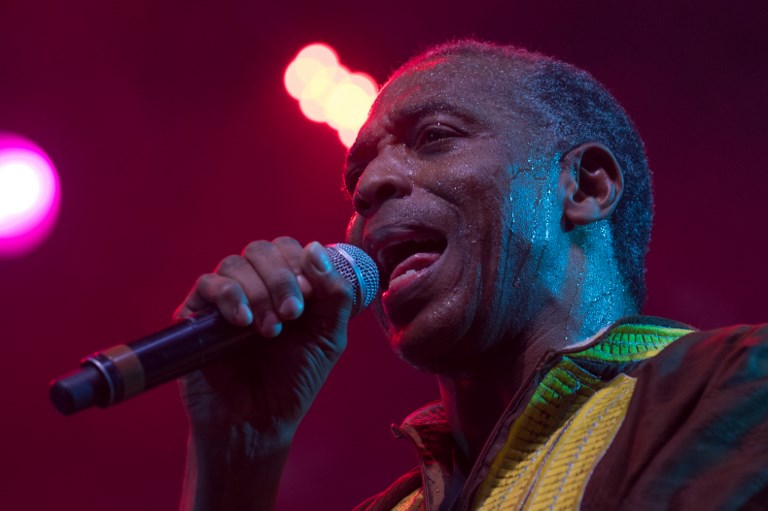 Femi Kuti has spent his life railing in song against the ills holding back Africa. But these days he is feeling some optimism.

The 56-year-old carries forward the legacy of his legendary father, Afrobeat music pioneer Fela Kuti, whose searing attacks on government corruption and incompetence made him a scourge of Nigeria’s former military leaders.

Fela’s nightclub, the New Afrika Shrine, became a visible target of authorities eager to suppress dissent but earlier this month it received a very establishment guest, French President Emmanuel Macron, who took off his jacket and tie to party.

Macron’s visit is “a very big political statement — more a political than cultural or social statement. The Shrine, even during my father, battled the stigma of the government always attacking the place, saying they were criminals, dopeheads and so many negative things,” he said.

“So him coming to the place neutralizes all the naysayers,” Kuti, soft-spoken when not singing, told AFP as he sat meditatively in his dressing room before playing at Quebec City’s citywide summer music festival.

Kuti said he was certain Macron knew of the Shrine’s troubled relationship with power, seeing as the president-to-be spent time in Nigeria in 2002 as an intern at the French Embassy.

The artist said he has heard criticism about embracing Macron in light of France’s history in Africa. Fela had assailed the lingering effects of European rule on songs such as “Colonial Mentality.”

Kuti said that Macron, in power for little more than a year, could not be held responsible for colonialism and added: “Let’s look at it from the point of view of the crimes France has committed in Africa. How do you get them to talk about these issues if you don’t bring them to the table?”

Bringing his show to a public square in Quebec City, Kuti — backed up by a brassy nine-piece band — alternated between joyous riffs on his saxophone and politically loaded verse as a trio of female dancers twerked their behinds.

Kuti this year released his first studio album in five years, “One People One World,” in which he takes aim anew at strongmen and graft on songs such as “Dem Militarize Democracy” and “Corruption Na Stealing.”

But he also turns sanguine for the future on songs including the album’s title track and “Africa Will Be Great Again.” (He scoffs at the suggestion that the latter song has anything to do with US President Donald Trump’s slogan, saying he wrote it well before the real estate mogul’s political ascent.)

“I think the album is very optimistic from my past albums. It probably has to do with being a father and having to come up with solutions for my children,” he said.

“When they ask me questions, I think I have to look for positive answers. Or why then would I have children if the future is bleak for them?”

He said that Africans were not alone in needing a political awakening. He criticized Westerners’ attitudes on the migrant crisis, saying they too quickly forgot the impact of wars in Iraq, Syria and Afghanistan.

“It was so easy for people to just sit at home, not give a damn, that bombs are being thrown in these countries, innocent people were killed, as long as you had your breakfast, had sex, you had a good life,” he said. “And then suddenly you say it’s none of your business.”

Kuti voiced hope that Africans can find greater inspiration at home. He would love to be able to travel between cultural capitals Lagos and Johannesburg by high-speed train.

“I try to show the beauty of Africa through my music,” he said.

“Given the opportunity, the African will excel — beyond reasonable doubt. I strongly believe Africa can and should be the envy of the world.”