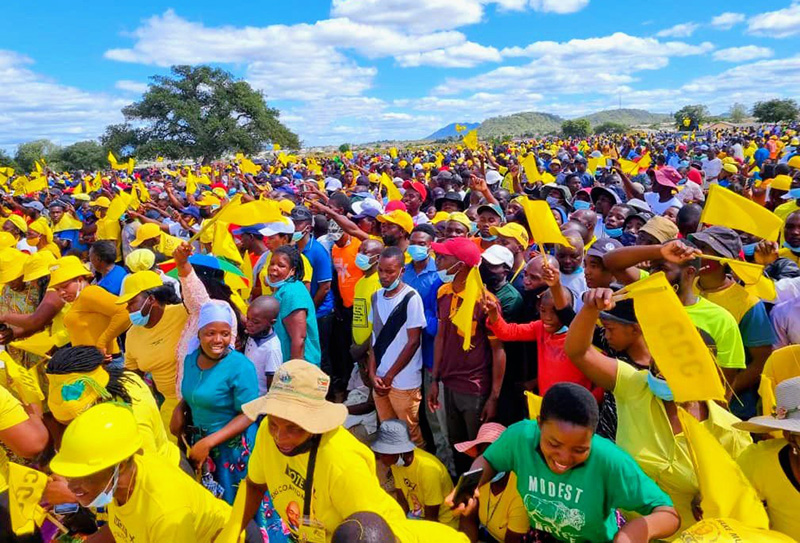 THE opposition Citizens Coalition for Change (CCC) party has apparently failed to solve its double candidate dilemma in Masvingo, with party leader Nelson Chamisa telling supporters Sunday that “I cannot tell you what to do on this” one.

Both have refused to back down with the party leadership seemingly unable to solve the dispute ahead of by-elections which are due this weekend.

Addressing thousands of supporters at Rujeko open grounds in the historic city on Sunday, Chamisa conceded that the party had failed to solve the problem.

“We somehow had an unfortunate situation of fielding two candidates in Ward 4,” he said.

“We would have expected the candidates to have somehow found an amicable solution but that is not the case.”

He added; “I am the father of the house but I cannot tell you what to do on this and hence I urge and hope that Tabe and Muchuchuti will find a solution somehow.”

Rujeko resident Philip Mutasa said they expected Chamisa to conclusively address the issue as it creates divisions among supporters and portrays the party as disorganized.

“I really expected Chamisa to deal with this now that he was in Masvingo but whatever he said was inconclusive.

“We expected a father figure authoritative voice as to how best solve this dilemma,” said Mutasa.

Muchuchuti insisted that she was not backing down.

“I am a candidate of Ward Four not for any selfish reason but because residents see leadership and a servant who can serve them and as such, I am just answering their call … to work for my people,” she said.

Zimbabwe will this weekend hold 133 by-elections for National Assembly and local authority seats most of which fell vacant following the recalls by the opposition MDC-T party.

The vote is widely being seen as a trial run for crunch general elections due next year with Chamisa again challenging Zanu PF rival Emmerson Mnangagwa for the State presidency after the bitterly disputed 2018 ballot.