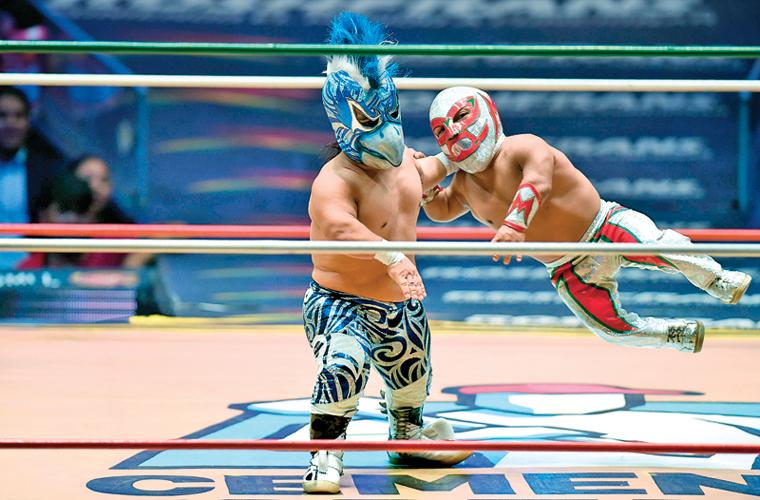 He is just 90 centimeters (less than three feet) tall, but he packs muscles, power and swagger in a little frame: meet Microman, the smallest star in Mexican professional wrestling.

Mexico’s “lucha libre,” a wildly popular mix of sport and entertainment, long featured midgets and dwarves in a deeply demeaning role: they were “mascotas” — a word that can mean both “mascot” and “pet” — for full-size wrestlers.

But a new generation of little people are now rising lucha libre stars in their own right, and dream of one day headlining the main events on their fight cards.

Microman wowed a skeptical crowd at one recent bout in Mexico City, where he and two co-stars, El Gallito and Guapito, took on another team of small-sized wrestlers.

He and his fellow “Micro Stars” were met with a smattering of jeers when they got in the ring.

But Microman silenced them when he climbed onto the top rope — more than three times his height — to execute a high-flying leap straight into the neck of his also small, but larger, rival.

He then flattened another with an acrobatic headstand kick known as the “Zero Gravity” move.

The audience went wild in Arena Mexico, the high cathedral of lucha libre.

“Did you see how he held that headstand on top of the ropes? He does it really well,” said one impressed fan, 28-year-old construction worker Juan Carlos Elizalde.

“He’s really tiny, but look how he fights!” said another, 30-year-old Felipe Escorza.

Microman, 19, takes it all in with an attitude befitting lucha libre’s biggest little star.

“Microman is a wrestler who gives everything he’s got for the crowd,” he said, referring to himself in the third person.

Mexican dwarf wrestler Microman is the son of Kemonito, who was also a midget fighter but had a very different career as a “mascota,” a sidekick for full-size wrestlers

Microman was fighting in the second match of the night — four bouts down from the top of the fight card.

But just having his name on the billing shows the progress he and other little wrestlers have made since his father’s time.

Microman is the son of Kemonito, who was also a midget wrestler but had a very different career.

For 30 years, Kemonito was a “mascota” for full-size wrestlers, a laughable sidekick who provided comic relief until the real action started.

Working conditions and the level of respect have improved dramatically since then in the Mexican professional wrestling league, the World Lucha Libre Council (CMLL), says Catalina Gaspar, an activist for little people’s rights.

“They train them professionally now. I’ve been really happy to see that. Twenty years ago, they threw them in the ring with wrestlers who were two meters (more than 6’6″) tall, and they got injured a lot,” Gaspar told AFP.

Dwarf fighters (L-R) Chamuel, Gallito and Microman train at the Arena Mexico — activists say little people are now seen as idols in the ring, not mascots or buffoons

Kemonito’s generation had no health insurance or benefits, but put up with the job for lack of other options, she said.

“Some of them were paralyzed… One even committed suicide,” she said.

“But now they are seen as idols, not mascots or buffoons.”

But Gaspar, who is herself just over one meter tall, said there is still a long way to go: social security benefits, pension plans and other support for “life after wrestling.”

The dwarf wrestlers have attracted a loyal following at the Arena Mexico, the high cathedral of lucha libre

The eight Micro Stars debuted in April 2017 as the third weight category in the CMLL.

Their coach, wrestling legend The Last Warrior, remembers it as a revelation.

“It was Children’s Day, and it was awesome. Everybody in the crowd was going crazy,” he said.

Microman himself said he did not know just what to expect that day.

“I didn’t know people would react like that, that they would back me so much without even knowing me. I think it was my happiest day in wrestling,” he said.

The Micro Stars started out with abbreviated bouts, but now fight full-length matches just like their bigger peers.

They do not earn a regular salary, but they get medical care, health insurance and a guarantee of at least two events per month, according to the CMLL.

“That makes you nervous, because you never know what will happen, whether people will like it,” said Microman.

“But when you enter the arena and start walking down the bridge, you just do what you have to do, which is show everything you know in the ring.”