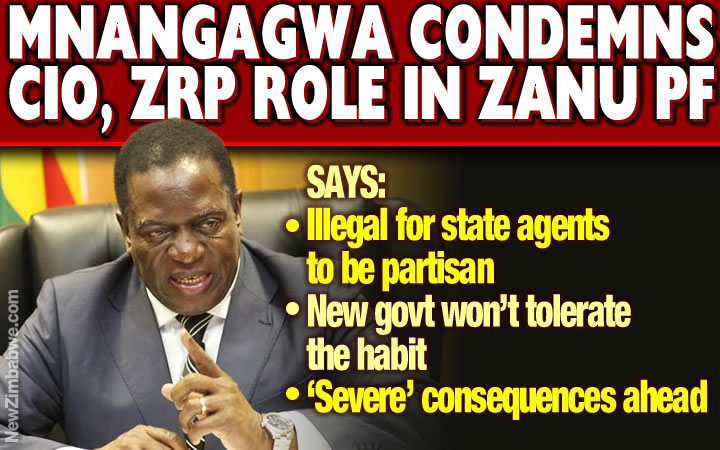 PRESIDENT Emmerson Mnangagwa has denied enlisting security forces in running the affairs of Zanu PF saying it is neither constitutional nor the ruling party policy.

There were reports and photographs on social media showing officers from the Central Intelligence Organisation and the Zimbabwe Republic Police (ZRP) assisting as polling agents and running party errands.

Regis Chikowore, acting secretary for Information, Media and Broadcasting Services, said the president did not instruct ZRP nor the army to assist in the Zanu PF primaries.

“Any such instances, which might have occurred in the just ended party primary election would amount to a breach of Zanu PF policy and certainly a flagrant violation of the laws of the land which must be roundly condemned and stopped forthwith,” Chikowore said this Wednesday.

Chikowore said any security officer found violating the law would be “dealt with severely” under the new dispensation.

“Let it be known that any conflation of party and state institutions as might have happened in the past will not be allowed under the new dispensation where the electoral playing field must be seen to be fair and even,” he said.

Former president Robert Mugabe was accused by opposition of using the military and police to remain in power during his 37 year-long reign.

However, Mnangagwa said law and order remained a critical component of any society which appreciates the importance of peace.

“Having said this, it must be acknowledged and accepted that our law enforcement agencies should and will be deployed to ensure law, order and preservation of the peace wherever people gather, including for political purposes,” he said.

Chikowore added, “Government relies on all those in political leadership to send this clear message to their parties and their membership.”

The president reaffirmed his commitment to a credible, uncontested, free and fair election.

“To that end government has invited all manner of observers to bear witness to the fulfillment of this pledge” said Chikowore.