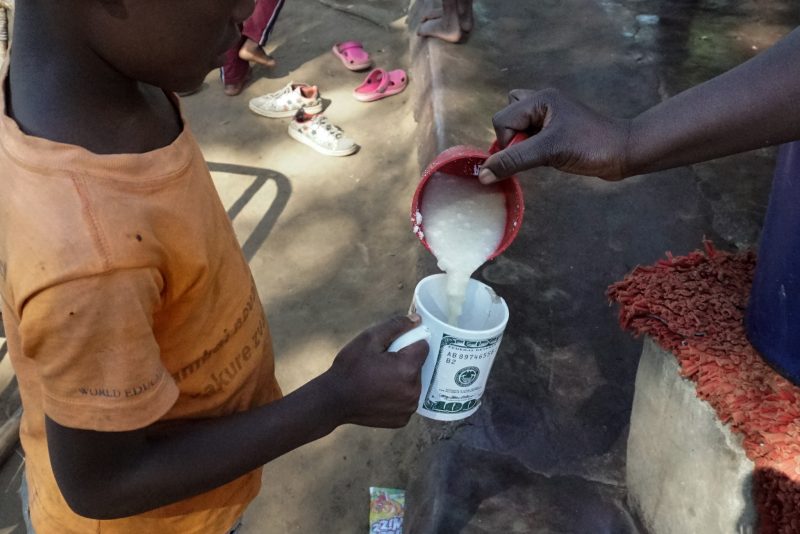 A helper at a local child-care centre in Kambuzuma, Harare dishes out a homemade drink made of mealie meal porridge before the children disperse for the day.
Spread This News

BEFORE the coronavirus pandemic, Mai Tafara Children’s Center was a bustling refuge for the 50 children it serves.

The kids, many of whom are orphans, would come to the center in Tafara, a high-density suburb in Zimbabwe’s capital city of Harare, and enjoy a heavy lunch consisting of sadza — a dense porridge made from maize meal — plus sugar bean, leafy greens or soya mince, an inexpensive, soybean-based protein.

They would eat their fill and spend the afternoon doing arts and crafts or homework.

But that changed in March 2020, as the coronavirus emerged. Like many countries, Zimbabwe enacted a strict lockdown to limit the spread of the virus.

“Things have been very tough for the children,” says Eleanor Alfred, founder of Mai Tafara Children’s Center. “These children do not have parents, and sometimes no family at all, to go to for food and necessities — just us. And we cannot let them down.”

The effects are ricocheting through communities worldwide. Child hunger has skyrocketed since the start of the pandemic, according to the 2020 Annual Report from the United Nations Children’s Fund, known as UNICEF.

An additional 6.7 million children under age 5 are now at risk of wasting, a form of malnutrition, in the next year. This could lead to at least 10,000 more children dying each month from food insecurity.

The pandemic has added pressure on centers like Mai Tafara, which serve as a fragile last resort to feed and educate vulnerable children.

Covid-19’s repercussions, including death and loss of employment, mean centers have more mouths to feed, alongside an ever-dwindling base of resources.

Alfred, fondly known as “Mai Tafara” — Shona for “mother of Tafara” — says that it has become increasingly difficult to provide meals for the children.

The center’s one donor, a Zimbabwean living in Australia, was unable to continue funding the operation due to financial struggles prompted by the pandemic. The donor had supplied the center with money to buy food, such as mealie meal, a hot porridge made from maize flour and a staple meal in Zimbabwe.

“I have had to sometimes dig into my own pocket and resources to try and stretch them out so the children have some form of consistency,” Alfred says.

“I take foodstuffs from home sometimes to cook at the center, and sometimes I take whatever money I have to add to the children’s school fees, especially those in examination classes.”

Water shortages are a persistent issue in Zimbabwe due to lack of purifying chemicals and an ailing pipe system.

But that means children must “go and queue all day for water, without having eaten anything, only to go home at the end of the day and find nothing,” Alfred says, noting that many of the children live with grandparents who aren’t strong enough to work.

The number of vulnerable children and orphans in Zimbabwe has increased amid two decades of economic instability.

HIV/AIDS and related illnesses also have had an impact; in 2019, 13% of Zimbabwean children age 17 and younger had lost one or both parents to the disease, according to a survey by the Zimbabwe National Statistics Agency.

In May, Faith Community Support Trust, a child-care center in Kambuzuma, a suburb of Harare, was stretching supplies meant to serve 30 children in order to care for 40, said Orpah Magadzire, the resident caregiver, who later contracted Covid-19 and died. Phone calls to the center now go unanswered.

In Bulawayo, Zimbabwe’s second-largest city, Siduduzile Nkomo uses income from her tailoring business to care for about 45 orphaned and vulnerable children at the center she runs.

In addition to her own funds, she also receives assistance from the surrounding community, including residents and some businesses.

But Nkomo says the coronavirus has affected everyone, and contributions have tapered off.

The government is grappling with a currency crisis and many donation-based organizations working in the region already are stretched thin.

Henry Chigama, president and chief executive officer of EatOut Movement, a startup initiative meant to fight homelessness and poverty, says the pandemic has dried up resources.

“When Covid-19 began, companies and individuals were able and willing to donate items which we then gave to orphans and vulnerable children,” he says.

“However, as the pandemic continued, companies also became strained, a situation which has also affected us as an organization.”

For childcare centers, that may mean turning to other revenue streams.

“These homes will need to come up with other self-sustaining methods, such as agriculture,” says Thomas Sithole, a Zimbabwean social expert and civic society leader.

“The impact of Covid-19 on various societal aspects has been profound, and homes that look after vulnerable children have not been spared.”