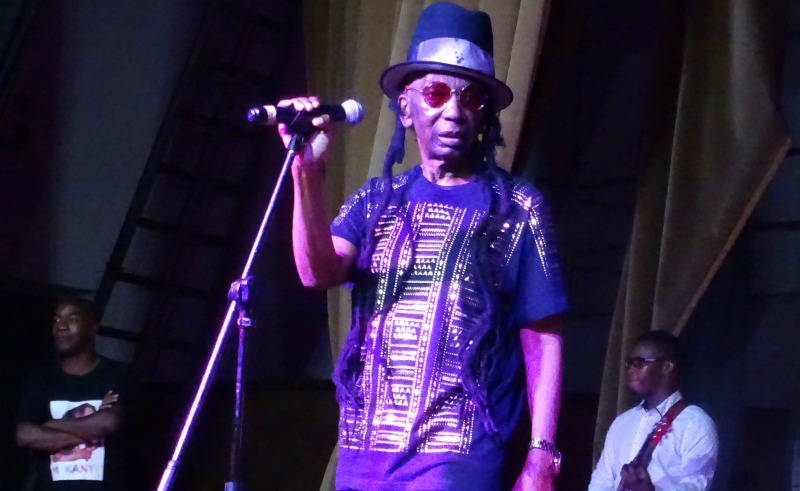 UNITED States of America (USA) based Chimurenga music guru, Thomas Mapfumo on Saturday dished out a lifetime scintillating performance during his first Peace Tour show at the large city hall in Bulawayo.

Mapfumo, whose Gweru show failed to take off in Gweru on Friday evening due to power connection challenges, proved that was is still a force to reckon with in the musical arena despite his advanced age.

Clad in a blue jean shirt and trousers and his trade mark black straw hat, the internationally acclaimed musician and his new look Blacks Unlimited trooped on stage at exactly 1.30 am after Jays Marabini had performed.

Infact, to the uninitiated, it was difficult to even notice the absence of the three influential blacks unlimited members.

Both Svosve and Kamoyo were part of the original Blacks Unlimited.

His dancing and baking girls were also exceptionally good.

Also part of the entourage was acclaimed mbira player Birzel Makombe who was supported by other two mbira players.

The sizable crowd which sacrificed to part away with their hard earned $US10 or $40 bond was treated to a non-stop four hour musical feast.

The show ended at 4:45 am with Chirombo Musango being his closing song, capping what many who attended the event described as a memorable gig.

“Everything went according to our plans. It was a good start and we expect to iron out some of the challenges which we faced during the coming shows,” said Vava in an interview with New Zimbabwe.com.

Vava said crowd favourite Zvamida will join the group in the next shows.

“Gilbert is actually arriving today (Sunday) and we expect him to join the rest of crew once he arrives,” he said.

Mapfumo and his Blacks Unlimited will perform in Beitbridge and Masvingo next week before travelling to Kariba, Mutare and Kadoma.