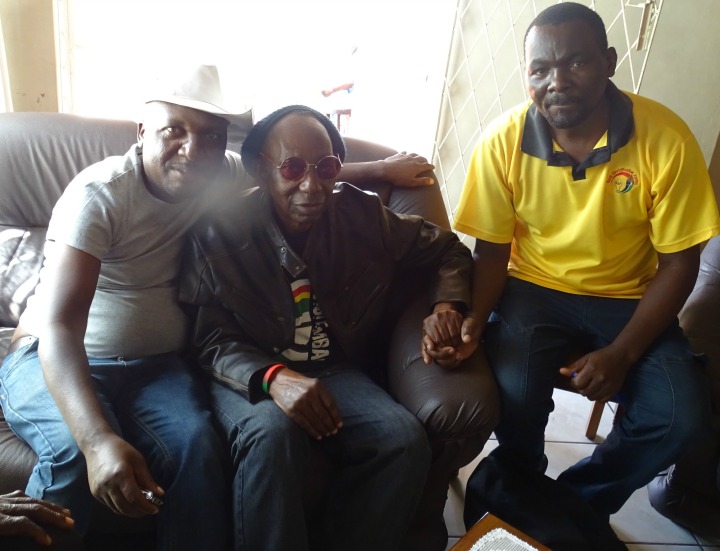 The legendary musician who was accompanied by his wife, Verna (nee Dangarembga), children and his Nigerian son –in law, arrived in the city of Kings in the morning and returned to the capital after laying a wreath at his mother’s in law grave at Athlone Cemetery.

The popular musician also laid wreaths for his other relatives who passed away while he was away. Mukanya left the country more than ten years ago to settle in the United States of America.

The delegation’s first stop was along Fife Street at some florists outside the City Hall where they bought some flowers.

In an exclusive interview with New Zimbabwe, the Lion of Zimbabwe as Mapfumo is fondly known by his legions of fans across the country said he greatly missed home, especially his friends and relatives.

“I have been missing my relatives and friends for a very long time. I spent many years away. We could not come back because of the previous administration which was persecuting me,” said Mapfumo.

Mukanya said he also missed his favourite dish of sadza and beef stew.

“I missed sadza a lot. You know sadza shapes us as a people. Our beef is so delicious as compared to what you find in America. In that country they eat junk food,” he said.

“Even my kids were missing home greatly. They are so happy to be home. One of the kids cannot speak Shona because she was only two years when we left Zimbabwe. She is now 21 years. This is very bad because a person should be able to speak his or her native language,” Mapfumo said.

Asked about his impending show at Glamis Arena on Saturday, he promised fireworks at the gig.

He said he will play his golden oldies as well as his latest works from his new album Chauya Cauya.

“We will cater for fans of all age groups. My fans will also be able to sample my forthcoming album, Chauya Chauya.

The dreadlocked musician expressed regret that he will not be able to play for his fans in others cities but hinted that he will be back very soon to do so.

“Now that things have politically changed in the country, we will come back very often to cater for our fans outside Harare,” he added.

Mapfumo assured his fans that the Chimurenga genre will not die even if he passes away.

“There are many young artistes who have sent their demos to me. They are reviving Chimurenga music and to me that is a great job. We will continue to support them,” he added.