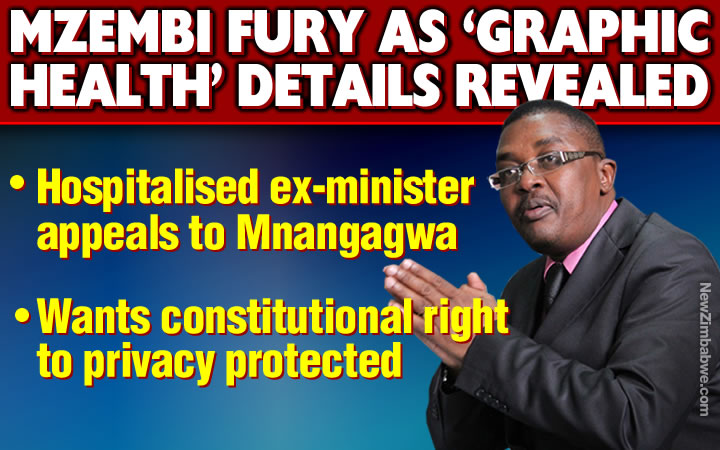 FORMER foreign affairs minister Walter Mzembi has accused the Zanu PF government and sections of the judiciary of “hating” him, citing a Harare magistrate’s decision to make public graphic details of his ailment.

Said the minister in an emotional statement from his hospital bed late Thursday; “I don’t wish this treatment to anyone and I just wonder how we can hate each other to this extent, where we throw basic ubuntu and human ethos through the window!”

Mzembi is said to be in a “stable” condition at a South African hospital after undergoing surgery for the undisclosed medical complaint.

He is being prosecuted on corruption which relate to his time as tourism minister.

On Wednesday, he however, failed to attend a court section, having been committed to the Intensive Care Unit of an unspecified South African hospital recovering from surgery to solve an unspecified medical problem.
Once described by former president Robert Mugabe as his “best minister”, the former minister expressed outrage over the manner in his case has been handled at a time he, and his family, are going through a difficult time.

“I had previously secured State consent and endorsement of another magistrate to travel to South Africa for the Surgery,” he explained.

“She, the magistrate, had in a previous hearing conducted my initial application in camera, but alas her successor would not have it, she wanted it in public, the (a local daily) cashed on it and headlined my tragic circumstances in a story headlined and front paged ‘Mzembi critically ill and in ICU’.

Mzembi appealed to president Emmerson Mnangagwa, for “constitutional protection of my rights to privacy in sickness and recuperation.
“This public appeal and update has become necessary after the State decided to make my medical condition and records a matter of public record even after pleading for discretion and confidentiality as is best practice internationally.”

He added, “They (family) heard it from the Newsday, including my two daughters in London, and a son in Zambia.

“My siblings too where taken aback, by this degree of recklessness and insensitivity of the State over an individual’s health.

“I still have many friends locally and abroad, they too were in a state of disbelief on the degree of callousness of our court and justice system, so were the specialists in South Africa who eventually attended to me.”

He said had protected his children from learning about how serious his condition was because some were sitting for national exams.

Nothing special about Mzembi

During a court hearing Wednesday, his lawyer Job Sikhala, was denied a plea to have the magistrate privately review the case until Mzembi recovers, arguing that there was nothing special about the former cabinet minister.

“My lawyer was pressured and directed by the presiding magistrate on the instigation of the public prosecutor, to give graphic details of my state of health in order to avert a warrant of arrest even as I was being simultaneously operated on in South Africa,” he said.

“My surgery took a gruesome four hours, running simultaneously with an attempt to issue a warrant of arrest on me by the State.

“I was wheeled into the ICU, with the conscious and full knowledge of the State’s intentions and could not help but feel sorry for my wife and son who stood by urging me to forget the persecution and focus on the life-saving operation at hand.”

Regarding the corruption allegations, Mzembi reiterated his innocence, vowing to return and defend himself after he has recovered from the surgery.

“Let me state that I am the least worried about a warrant of arrest at this stage, whatever prompts the State to behave in this manner.

“What is most important for me and my family, for now, is my recovery, my health and my life.

“I will, at an appropriate time, defend myself from the spurious politically motivated charges that have been raised against me.

“Indeed ‘there is nothing special about Mzembi’ that he cannot be tried, and so be it; when I am fit to stand trial, I will make myself available.”