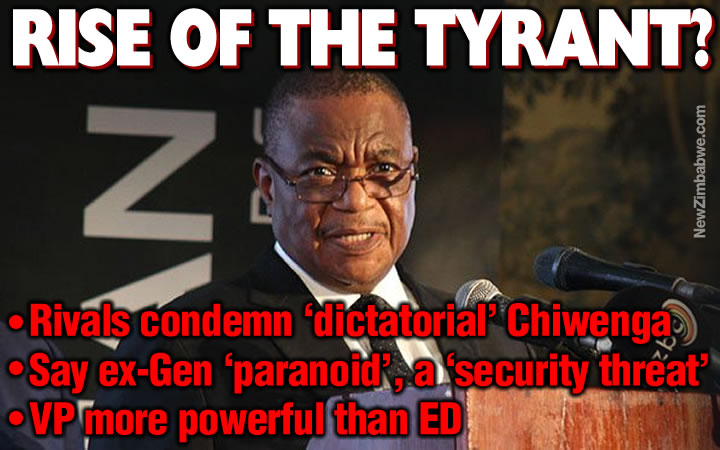 THE shock sacking on Tuesday of nurses by Vice President Constantino Chiwenga for failing to heed a government call to end their industrial action has spotlighted on the former military commander’s overbearing influence on governance issues, which date back to the time he was the country’s top soldier.

During his time as Zimbabwe Defence Forces Commander, Chiwenga led an unpopular declaration by the country’s security commanders they were never going to countenance then President Robert Mugabe’s defeat, let alone by opponents who never took part in the country’s liberation war.

Chiwenga went on to block then opposition leader Morgan Tsvangirai from taking over as President when all seemed the now late charismatic leader was romping to victory in a bloody presidential run-off poll 2008.

The once feared top soldier has also been scorned for meddling in Zanu PF internal politics and further describing the ruling party as chinu chedu (our property) and the military as stoke brokers of the country.

The acts elicited strong remarks from then President Mugabe who berated the military top brass for allegedly “plotting a coup”.

When Mugabe visited a fierce purge on his allies he accused of plotting to remove him from his job in 2015, he spared the country’s security organs in apparent fears of stoking a backlash from controllers of the country’s armouries.

In November 2017, the inevitable happened as Chiwenga struck again, this time with fatal consequences to Mugabe’s political career.

Unlike in some of his past acts, the “soft coup” was popular among locals who celebrated the fall of their leader.

In an apparent attempt to camouflage what many felt was a coup, although in hushed tones, Chiwenga allowed then Vice President Emmerson Mnangagwa to take over as President while he became VP. It never took him time to grab the Defence portfolio from co-VP Kembo Mohadi who was relegated to manage the less influential ministry of peace and reconciliation.

The VP struck again, this time with the unilateral sacking of several members of the police top brass. The decision was later reversed by President Mnangagwa.

Only this week, Chiwenga summarily sacked striking nurses, further putting Mnangagwa in an invidious position of having to choose between a man who ushered him to State House and a population looking up to his leadership for economic salvation.

There are reports of simmering tensions between the VP and his boss with signs Chiwenga was the defacto President having been the one who cleared the way for an unelected Mnangagwa to assume the reins.

With his Presidential ambitions now a matter of public record, it is feared his ascendancy to the country’s top job could turn disastrous for a country that has seen enough dictatoriship under Mugabe for 37 years.

“This new concept of a co-presidency being exercised by the Croc (Mnangagwa) and the General is creating a constitutional crisis,” said Jacob Mafume, PDP spokesperson.

He added: “The experiment is not going to work in the current format. One of them has to agree he is ceremonial for it to work. In this case maybe the Croc was put in for window dressing and is yet to come to terms with it.

“They are two lions in the same basket all looking to eat. The strike is political he says without defining what he means. That accusation alone from him is enough to fire every striking nurse as the head of a management cluster not even a constitutional cluster but an arbitrary management cluster.”

Mafume said the VP was behaving as if Mnangagwa was not his boss but a partner.

“He is paranoid out of control drunk with power,” he said.

Jealous Mawarire, spokesperson for the Ambrose Mutinhiri led National Patriotic Front, was also scathing of Chiwenga and his actions.

“The command way of doing business brought by the coup government is untenable, as illegal as the regime itself and patently insensitive to the reasons why the nurses resorted to industrial action in the first place.”

“Clearly soldiers are not leaders nor managers when it comes to industrial issues. Remember the Permanent Secretary in the Ministry is a retired General and the chairman of the Cluster is a coup master, nothing will come from them,” he said.